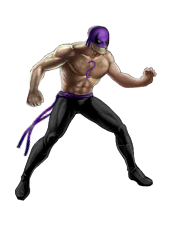 You did it Danny...The trial of Shou-Lao...You survived...You're the Iron Fist! Our people need to meet the Immortal Weapon. I'll be your second. Standing beside you on the pass. Protectors of K'un-Lun.

Growing up in K'un Lun

Davos was the son of Lei-Kung "the Thunderer", a revered member of the Order of the Crane Mother. Growing up, Davos had always wanted to become the Iron Fist and trained hard to achieve that goal. One day, the monks Chodak and Tashi returned to K'un-Lun with an outsider named Danny Rand. Rand became apprenticed to Thunderer and Davos became close friends with the outsider and came to regard him as a brother. The two youth shared many experiences together such as stealing wine and apples or stealing Brother Kuo's cart to go and peek on the village girls.

Years passed and eventually another trainee was chosen to go through Shou-Lao's trials and become Iron Fist. Instead of himself as Davos hoped, Rand got chosen instead. Despite feeling intense jealousy over being passed over, Davos buried his feelings because he still regarded Rand as his friend.

When Rand went to undergo his trials, Davos went to check on him. When he reached Shou-Lao's cave, he found Rand unconscious outside the Shou Lao's cave. Concerned for his friend, he went to check on him. Rand awoke and in his confusion and panic, his fist started burning brightly with Chi, proving that Rand had succeeded in his trial. Davos helped Rand onto his feet as they headed back to the village, promising that he will stand by his side as his second and fellow protector of K'un-Lun.

For a time, both Davos and Rand guarded the passage together. Suddenly one day, Rand left without a word or trace. Davos hoped Rand will eventually come back to complete the test when he was 18. As time went by, that hope turned into disappointment and resentment for his friend's abandonment.

Retrieved from "https://marvelcomicsfanon.fandom.com/wiki/Davos_(Earth-1010)?oldid=192474"
Community content is available under CC-BY-SA unless otherwise noted.