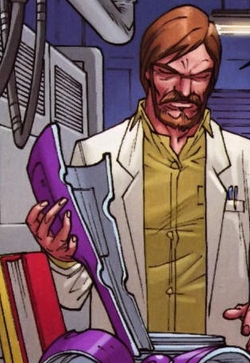 Dr. Stack was a single divorced father, who was an expert in the field of robotics. He was recommended by S.H.I.E.L.D. for the Machine Men project, and though he hesitated due to his son's mental illness, he decided he could manage both, and joined the project. He soon found himself at the helm of the project, taking more and more time away from his son.

After his son suffered the worst bipolar episode of his life and made threats on his life, David realized that the best way to balance his son and his work would be to literally fuse them. He brought his son to his work after hours, and hooked him up to the Adamantium prototype Z2P45-9. He attempted to transfer his son into the robot by electrocuting him and placing the currents from his son into the robot, powering it up with Aaron's thoughts inside. However, Stack's colleague Joe Kragg also was at the lab late, and noticed what the doctor was doing. He decided to blow the lab's electrical power in order to ensure the robot depowered. Instead, the lab was overloaded with electricity, killing both of the Stacks and awakening the robot, seemingly successfully containing the soul of Aaron Stack.

None. Dr. Stack is an ordinary human.

Genius Intellect: Dr. Stack was a genius in the field of electronics. Had he lived, he would have been able to master anything he attempted, as revealed by his status as the Watcher in Earth-Renaissance X.

All those of a conventional human. The one that killed him was overexposure to electricity.

Though only appearing in one comic, and appearing in about a dozen more through flashbacks, both show Dr. David Stack as the same man: a devoted father. He did his best to care for his son, regardless of the circumstances, and was willing to break laws to give him the best care he knew how. Despite his intelligence, he was humble, and refused to speak about his ex-wife, claiming "It's in the past." He tended to dwell on his mistakes, but Dr. Stack was always remembered by all but the cold-hearted and damaged Joe Kragg as a good man and devoted father. These were the exact words carved on his tombstone.

Retrieved from "https://marvelcomicsfanon.fandom.com/wiki/David_Stack_(Earth-166)?oldid=231107"
Community content is available under CC-BY-SA unless otherwise noted.