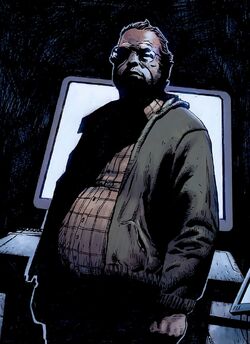 Earth-1010
Base Of Operations
Various warehouses along the New Jersey Docks.
Characteristics
Gender

Micro is also one of Skye's various contacts from the Rising Tide. He has a particular affinity for crime scenes. Micro alerted Skye to a murder in Rhinebeck, New York, where a mysterious set of glyphs were carved into the victim's corpse.

He later aided the Punisher, Ghost Rider, and various SHIELD agents against the demon Blackheart.

Master of computer programming and information gathering; skilled in construction and gathering of weaponry; experienced in the use of firearms.