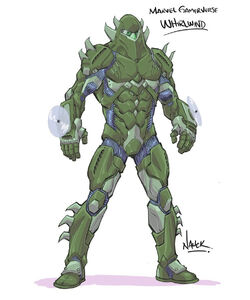 First time I powered up, I hurled all over the inside of my armor. It's been deep cleaned, twice, but I can still smell it.

David Cannon was nothing more than a lowly AIM Drone who joined after being dishonorably discharged from the US Army. However, after AIM recovered Terrigen they began screening their soldiers for possible Inhuman DNA, and David tested positive.

He was put through the process of Terrigenesis and emerged with the ability to move his body at speeds fast enough to manifest into a living tornado. He was quickly outfitted with a suit of armor and dubbed Whirlwind. AIM started using him as a weapon against the Avengers, but eventually wound up being taken down by the Wasp. Before he could be transported to the Raft, however, the Inhuman Royal Family intervened and claimed his Inhuman DNA made him a citizen of Attilan, and he would be sentenced to Inhuman justice.

Reluctantly, the American government allowed them to take him, and he was placed in Attilan's dungeons. There he remained, until the day that Hive came to Attilan and began swaying members of the Royal Family, which gave him access to the dungeons. Whirlwind then became one of several Inhumans who was put under Hive's sway and forced to join his Inhuman Revolution Front.

Following Hive's death, Whirlwind's mind was set free and, shaken by everything he'd been forced to do, he turned himself in to S.H.I.E.L.D., who transported him to the Raft. He didn't remain there long, however, as Nick Fury dubbed him fit to join the Thunderbolts, a black ops team that would operate out of the Raft and work for S.H.I.E.L.D. in secret.

Retrieved from "https://marvelcomicsfanon.fandom.com/wiki/David_Cannon_(Earth-101)?oldid=250536"
Community content is available under CC-BY-SA unless otherwise noted.