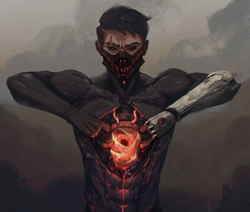 David Callahan was born to middle class just a few years before the rise of Apocalypse. After his forces detected David's dormant mutant DNA, the Horseman of Death was sent to collect him. Terrified, David's powers manifested and completely obliterated his home town, killing his parents and everyone he knew, leaving only him and the Archangel.

He was then raised in Apocalypse's mutant training center for years, where they attempted to weaponize his detonation and pyrokinetic abilities. David refused to give them what they wanted and tried to kill himself several times, only to discover any attempt to kill him only made him come back stronger.

The X-Men would eventually stage a raid on the training center, liberating David and several other students, all of whom decided to join the X-Men. Taking on the name Incubator, he actively tries to avoid becoming close with anyone, knowing that he will only eventually end up hurting them.

After serving with the X-Men for some time, Incubator discovered that Mister Sinister and the Sorcerer Supreme had developed a serum that would enhance mutant abilities, but took a near fatal toll on the user. The serum was being kept in the Training Center, and he decided to lead a squad of his fellow liberatees to destroy the Center. However, he did not tell them his real plan. Once there, he gained access to the serum and injected himself with it, using his powers to completely demolish the facility, finally claiming his own life in the process.

Retrieved from "https://marvelcomicsfanon.fandom.com/wiki/David_Callahan_(Earth-9999)?oldid=246096"
Community content is available under CC-BY-SA unless otherwise noted.