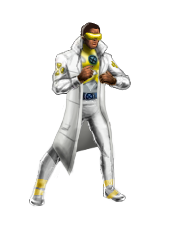 David Alleyne was raised by his father and mother with his younger sister, Kim, in their home in the Hyde Park neighborhood of Chicago, Illinois. Growing up, David was always bright and intelligent, but when his mutant powers activated, the answers just started coming to him. He quickly realized he was mutant with the ability to telepathically absorb the knowledge and skills of anyone nearby. Concerned that this knowledge was not authentic, David kept his mutation a secret and began studying even harder. He began taking college-level courses while finishing high school until he was outed by the hate group Purity. After his cover was blown, Danielle Moonstar recruited him.

David was enrolled in the Xavier's School for Gifted Youngsters, given the codename Prodigy, and placed on the New Mutants.

Prodigy is a mutant

Even without his acquired knowledge, Prodigy is very intelligent. Without using his powers, he's completed college level courses while in high school, operated complex technology, piloted the Blackbird, and built the Danger Cave.

Retrieved from "https://marvelcomicsfanon.fandom.com/wiki/David_Alleyne_(Earth-1010)?oldid=204547"
Community content is available under CC-BY-SA unless otherwise noted.