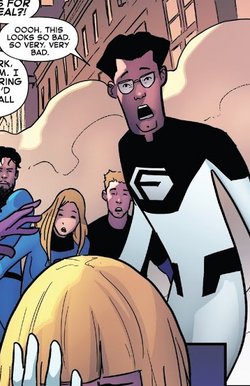 Alright, team, stick to the plan. Let's be fantastic.

Life at the Clinic

Little is known of the early life of Jerome Walkins before the White Event. What is known is that he was affected by the White Event and granted the paranormal power of pliability: an ability which was taken notice of by the government, which brought him to the Clinic of Paranormal Research to avoid causing public fear against individuals who otherwise seemed to be mutants. Jerome was subsequently inducted by Indigo into joining the Black Powers: a group comprised of all African-American residents of the Clinic, devoted to their own self-protection. This idea appealed to him, as he was afraid of the rampant racism among the lesser-minded patients at the Clinic. However, Jerome didn't agree with Indigo's increasingly aggressive tactics, granting him the codename Squirm and leading him to take the first opportunity to distance himself from the group, instead forming the P.D.Teens with the other juvenile patients at the Clinic.

This decision did not go unnoticed by Indigo, who now targeted him for betraying the group. Jerome was too shy to ask outright for increased support and protection from his new teammates, particularly since their members had no real leadership qualities and little control over their own powers. However, Indigo did not prove to be Jerome's most immediate threat: two other patients did. Having already killed three of Squirm's teammates, Freefall trapped him under an immense gravity field, which would have crushed any ordinary human to death. However, Jerome's paranormal durability saved him, although he was now virtually two-dimensional and could no longer regain his standard human thickness. The P.D.Teens were horrified when they found out what happened, and after a massive racially motivated riot where yet another attempt was made on his life, the P.D.Teens opted to run away from the Clinic.

The seven teens managed to escape the Clinic without any trouble, hijacking a nearby car and driving east, eventually reaching one of the Clinic's former patients at her home. She agreed to put them up on a temporary basis, allowing them to live in the basement while they figured out a long-term plan. Jerome was the only one who actively worried about the future, and he routinely broke up the scuffles between the others before they got too destructive. However, Jerome's worst fears came true when the patriarch of the house had more than he could take and ordered the kids to leave. Ultimately, the Harrington family fled their home after their marriage dissolved and Stephanie eloped with David, and the house was left vacant, which the P.D.Teens claimed as their own.

They still had no means to survive, however, and were forced to rob stores simply to get food and the money needed to get clothing. Jerome was particularly useful in this regard, as his super-thin nature meant he could sneak right by cashiers as they looked, provided he moved quickly enough. Eventually the local authorities caught onto their string of robberies and the teens were involved in a car chase. The inexperienced young drivers crashed, killing three of them and critically injuring the rest. Jerome once again survived because of his paranormal durability, though he was sedated and taken in by the United States Army. He was convinced to register under the Paranormal Registration Act, after completing his education and going through combat training. Grateful for his new start, Jerome changed his name to Darryl Runner and began serving his country as a uniformed soldier: a decision he claims saved his life and made it worth living through his past.

Transitioning to the Initiative

Darryl was a nice-soundin' name, sounded friendly an' racially ambiguous, unlike Jerome. And Runner, well, I was Walkins before an' I was runnin' from my problems. So I sped up. And now I'm Runner, tryin' not to walk away from my past so much.

As an agent of S.T.A.R.S., Darryl was privy to the growing talk of government-sponsored superheroes becoming a globally-enforced phenomena. He was fully behind the prospect of registration, given the effect that joining the army had on his life. Because he was one of the first supporters of the Superhuman Registration Act, he was assigned to one of the first teams: the Liberteens, due to the similarities of his powers to those of the Thin Man of World War II fame. He was paired with mostly other young people, with the exception of his former teammate-turned-enemy, Chill. After team-building exercises, the team was publicly debuted, and @-Dbattled against Flag-Smasher and his terrorist team when they tried to destroy the Liberty Bell.

They also assisted in trying to round up fugitive heroes, much to their chagrin. Though they enjoyed what they did, they shared the common feelings of not enjoying fighting other heroes. As such, when the Initiative was ended formally by the government, and Captain Rogers requested the reformation of the Initiative on a voluntary basis, the surviving Liberteens, including 2-D, agreed to become one of the ten teams as part of the program, now protecting the majority of the Mid-Atlantic.

Elasticity: 2-D has the power to stretch and contort his body, and he often stretched his limbs around someone and constricted in order to confine them. He has since gone far beyond these uses, stretching his limbs and torso hundreds of feet, and converting his body into forms evocative of origami.

Superhuman Durability: 2-D is also incredibly durable. It is unknown if this power is as a result of his elasticity, or if it is an entirely separate power. He is resistant to most kinds of physical harm, and has survived being choked, tied into knots and flattened by paranormally-high gravity.

Jerome was a very meek individual when brought into the Clinic. It's possible he was an only child, as he was very overwhelmed by the presence of more than a few people in a room at a time. He very seldom spoke, although he certainly had his own thoughts and ideas. He abhorred violence, and preferred merely having a good time, much more comfortable among the P.D.Teens than his old crew in the Black Powers. He was severely traumatized by his three near-death experiences, further traumatizing him almost beyond repair.

Darryl Runner is the Earth-166 counterpart of 2-D (Earth-616) and Jerome Walkins (Earth-148611) (also known as Squirm of the DDTeens). This decision was made to strengthen each character's personal story, as this decision was repeated with many other characters in the Marvel Renaissance.

Retrieved from "https://marvelcomicsfanon.fandom.com/wiki/Darryl_Runner_(Earth-166)?oldid=242411"
Community content is available under CC-BY-SA unless otherwise noted.