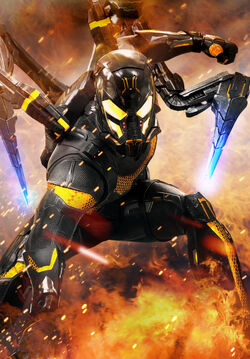 I will incinerate you! And no one will even remember your name!

Darren Cross is an ex-colleague of Hank Pym. After being discredited, Darren Cross joined the Advanced Idea Mechanics to let his ideas flourish. Following the emergence of the hero, Gigantica, Darren became enamored with her powers and started studying how to replicate them.

He was later able to discover an unstable particle that allowed him to alter the size of himself as long as he was wearing his experimental Yellowjacket suit. He was then transferred into the Enforcers, and started using the Yellowjacket suit to wreak havoc on the Squadron Supreme.

Yellowjacket was later paired with Paladin to assassinate Hank Pym, which he took great pleasure in. However, his victory was short-lived, as he was hunted down by Iron Man, who hacked into his armor and short-circuited it, causing to shrink exponentially, essentially killing Darren.

Super Strength While in Yellowjacket Suit

Retrieved from "https://marvelcomicsfanon.fandom.com/wiki/Darren_Cross_(Earth-1515)?oldid=244495"
Community content is available under CC-BY-SA unless otherwise noted.