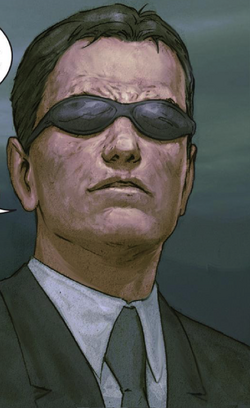 Dario Agger was born in Greece to a rich parents. He spent most of his life of an island in the Aegean Sea. When he was 9 years old his entire family was killed by pirates. He alone escaped and hid in a nearby cave and prayed for help. He used his family fortune to gain the best education the money could buy.

Dario became the CEO of Roxxon Oil Corporation, the wealthiest and most powerful multi-corporation in the world. He strives to make as much as money as possible regardless of the effects on the environment and uses Roxxon's vast financial resources to pay for lobbyists and lawyers in order to exploit and pollute as much as he wanted without consequence.

Retrieved from "https://marvelcomicsfanon.fandom.com/wiki/Dario_Agger_(Earth-1010)?oldid=163501"
Community content is available under CC-BY-SA unless otherwise noted.