"We all have our demons."

Daredevil: Guardian Devil is a television series based on the Marvel Comics character Daredevil. It stars Xavier Samuel as Matt Murdock / Daredevil, Michael Chernus as Franklin "Foggy" Nelson, Eliza Taylor as Karen Page, and Sofia Boutella as Elektra Natchios. It is the first series in the Marvel Knights Shared TV Universe, premiering on FX in September, 2016.

Season 1 premiered on September 17, 2016, and consisted of thirteen 42-45 minute episodes. Season 1 stars Xavier Samuel as Matt Murdock, a young, blind lawyer who uses his martial arts skills to fight crime as the vigilante Daredevil. The season focuses on the origins of Matt Murdock and Elektra Natchios (Sofia Boutella), as well as the rise to power of Wilson Fisk (Vinnie Jones) and the emergence of the Hand. The story takes some elements from the classic Frank Miller story "Born Again" and the famous issue Daredevil #181.

After being delayed, Season 2 was finally announced to premiere in 2018. Xavier Samuel returns as Matt Murdock, who tries to balance his role as the sworn protector of Hell's Kitchen with his career as a lawyer and new relationship with Karen Page (Eliza Taylor), as a new villain rises in New York, known only as "Mister Fear," spreading mass hysteria and chaos. Meanwhile, Elektra searches for the true origins of the Hand. The season is said to take inspiration from the 2007 story arc "Without Fear" and the 2004 limited series "Elektra: The Hand." 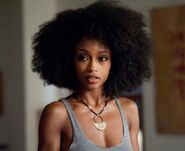 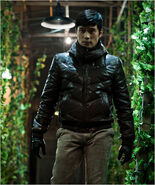 Raymond Bloch
Add a photo to this gallery

A second season was announced shortly after the first one's conclusion, though it was delayed until 2018. All of the series regulars from Season 1 will be reprising their respective roles, though Vinnie Jones will be appearing in a much smaller role as Wilson Fisk. Yaya DaCosta and Ben Foster also set to return as their respective recurring roles Mercedes Knight and Bullseye, while Matthew Goode and Lee Byung-hun will be appearing as new series regulars, portraying lawyer Lawrence Cranston and Hand ninja Kirigi, respectively. It was recently announced that Season 1 guest stars Ben Daniels and Guillermo Diaz, who portrayed Father Lantom and Melvin Potter respectively, have both been upgraded to recurring roles.

Two spin-off TV series have been announced, with the shows' shared universe being officially titled the Marvel Knights Shared TV Universe. The two spin-offs are The Punisher and Heroes for Hire. Mercedes "Misty" Knight appears as a recurring character on the show, played by Yaya DaCosta, while Frank Grillo has a cameo as Frank Castle at the end of Guardian Devil, Part 2.

(Feel free to post your review of the show on the bulleted list below, with your signature at the end)

Retrieved from "https://marvelcomicsfanon.fandom.com/wiki/Daredevil:_Guardian_Devil?oldid=224472"
Community content is available under CC-BY-SA unless otherwise noted.