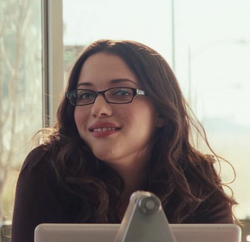 Darcy Lewis was a political science student, who ended up being assigned to astrophysicist Jane Foster as a graduate student due to the lack of applicants for Jane's graduate request.

As a result, she was travelling in a van with Jane and Jane's old mentor Erik Selvig, when the mysterious weather event subject of Foster's research unexpectedly resulted in a powerful vortex before them. As they struggled with the zero-visibility conditions, the van collided with a man who had stumbled out of the dust into their path. The man, who only announced himself as Thor, was injured again when Darcy tazered him, prompting them to take him to hospital.

The following day, Darcy made a surprise discovery when she noticed the figure of a man in one of the photographic images captured from the atmospheric event. While Jane realised that the newcomer might be able to shed some light on the event, Selvig was more sceptical, sparking a lengthy disagreement that Darcy only rarely weighed in on to support the more fanciful elements of Foster's theories.

Darcy continued to tag along with the scientists, providing numerous observations about their rapidly changing situation that were sometimes even helpful. She was present when Sif and the Warriors Three came to Earth, and later witnessed the restoration of Thor's powers as he fought the Destroyer.

Retrieved from "https://marvelcomicsfanon.fandom.com/wiki/Darcy_Lewis_(Earth-1010)?oldid=100014"
Community content is available under CC-BY-SA unless otherwise noted.