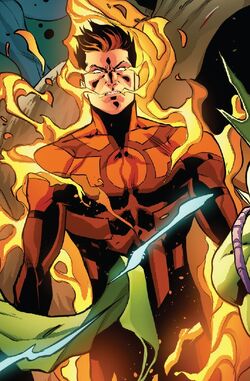 One day, I'm gonna burn too bright for them to handle.

Dante Pertuz grew up in the streets of Illinois, being raised by his single mother. At the age of 19, Dante was exposed to the Terrigen Mists, and discovered he was an Inhuman with the ability to manipulate fire and molten rock. However, he also discovered that his mother did not survive her exposure to Terrigen. Distraught and depressed, Dante went on the run, knowing he would soon be hunted by Apocalypse's forces for being an Inhuman.

Dante would later be approached by Nick Fury and Quake with an offer to fight against the tyranny of Apocalypse. Seeing no other logical path for his life to go down, Dante accepted and joined the Secret Warriors, being dubbed Inferno.

After fighting alongside the Secret Warriors for some time, he and Quake grew close, eventually falling in love and forming a relationship.

Eventually, the Secret Warriors established a safe haven for refugees from Apocalypse's death camps located somewhere on the coast of Alaska. Inferno had the idea of naming it "New Attilan" to honor the fallen Inhuman Royal Family. However, he was against the Warriors abandoning their mission to live there, which resulted in several arguments with Quake, who eventually convinced him that it was in the people's best interest to have protectors.

[[Category: In a Relationship with Daisy Johnson Characters]]
Retrieved from "https://marvelcomicsfanon.fandom.com/wiki/Dante_Pertuz_(Earth-9999)?oldid=247480"
Community content is available under CC-BY-SA unless otherwise noted.