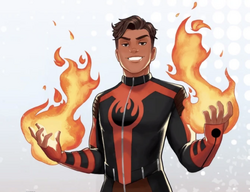 Is it getting hot in here or, oh who am I kidding I can't even finish the joke of course it's me.

Dante Pertuz grew up in Illinois living a relatively normal life. That is, until Terrigan began spreading across the world. It was then that he discovered his Inhuman DNA, and developed the ability to manipulate magma and fire with his mind.

He was eventually found by the Inhuman Royal Family of Attilan, who promised to give him a home and train him how to control his abilities. He then relocated to Attilan and began training with Queen Medusa. Over time, the two of them became very close and started to develop feelings for each other. However, Dante felt too guilty and did not want to betray the honor of his King Black Bolt.

Unbeknownst to Inferno, Black Bolt had already given Medusa permission to pursue her feelings, and the two began a secret relationship. He would later accompany the Royal Family to the planet Hala, home of the Kree Empire, to put an end to their extermination campaign.

The battle ended with Black Bolt's death. Inferno was distraught and depressed over the loss, but was also relieved that he did not have to hide his relationship anymore. That is, until Medusa ended things and told him she was pregnant with Black Bolt's baby. He wasn't willing to let her get away, and promised that he would help her raise the child, and the two got back together, and agreed to lead the remaining Inhumans into a new age.

[[Category: In a Relationship with Medusalith Amaquelin Characters]]
Retrieved from "https://marvelcomicsfanon.fandom.com/wiki/Dante_Pertuz_(Earth-101)?oldid=250305"
Community content is available under CC-BY-SA unless otherwise noted.