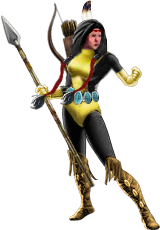 I am Cheyenne -- and today is a good day to die!

Danielle Moonstar is a Native American of the Cheyenne Nation. Moonstar's mutant powers emerged at puberty, but she could not control her ability to create visible images of people's greatest fears. Manifesting the images at unexpected moments alienated her from everyone in her community, except for her parents William and Peg Lonestar, and her grandfather, the chief and shaman Black Eagle.

One night, Dani created a symbolic vision of her parents' deaths. Shortly thereafter, Dani's parents disappeared during a trip to the mountains. Moonstar believed them to have been killed and her dreams were haunted, thereafter, by a vision of a demonic bear, whom she believed to be responsible for their deaths. In fact, Moonstar's parents had been transformed into the demonic bear by an as yet unrevealed cause. This bear intended to work the same transformation upon Moonstar, but the spells of Black Eagle kept the demonic bear away from her.

After her parents' disappearance, Moonstar was taken in by their friends, the Roberts. Danielle became close friends with their son, Pat. After she had been at the Roberts' home a week, Moonstar was at Sunday dinner with them, when Pat said something to her that provoked her. Moonstar lashed out at him with her psychic power and the images of the objects of Pat's greatest fear and desire appeared before Pat and his family. Moonstar fled to the mountains, where Black Eagle raised her over the following years.

Finally, Black Eagle sent a letter to Professor Charles Xavier asking him to provide Moonstar with the training she needed to utilize her powers. Xavier had become a friend of his son, William, Danielle's father, when both Xavier and William were in the army. Xavier and William had become blood brothers and Xavier had become acquainted with Black Eagle. When Black Eagle asked Moonstar to go with Prof. Xavier, she angrily refused, believing all Caucasians to be her enemies. In her anger, Moonstar unintentionally created an image of Black Eagle's death as he had foreseen it in a prophetic dream. Black Eagle ordered her to go with Prof. Xavier and she agreed.

Before Prof. Xavier arrived, Black Eagle was murdered by agents of Donald Pierce, a member of the Hellfire Club, who intended to overthrow its leader, Sebastian Shaw. Pierce was determined to kill Prof. Xavier, as well as other superhuman mutants. Moonstar, unaware of Pierce's involvement, vowed to take vengeance for her grandfather's death. Moonstar soon found herself hunted by Pierce's agents, but she was saved by Prof. Xavier. Dani agreed to work with Prof. Xavier to get her revenge on Pierce.

After Moonstar helped Prof. Xavier and other young mutants he had enlisted in defeating Pierce, she and the other young mutants became members of his new team, the New Mutants. This was a group of young superhuman mutants whom Prof. Xavier trained in the control and use of their powers at the School for Gifted Youngsters. Moonstar decided to remain with them to honor her grandfather's request, despite her initial hatred of all Caucasians, and she soon came to regard her fellow New Mutants as close friends, regardless of their racial background.

Moonstar is a mutant:

Empathic Illusion Casting: to create three-dimensional images of certain visual concepts from thoughts and emotional impressions within the minds of herself and others. Originally, Moonstar could only create images of the objects of other people's greatest fears. Later, she learned how to reach into another person's subconscious and project an image of the object of that person's "heart's desire." Still later, under Charles Xavier's further training, Moonstar learned to use her power to derive and project more specific images from another person's mind that were unrelated to such strong emotional states. Moreover, she learned how to project such images around herself and others in order to alter the appearance of herself and others. Most recently, Moonstar learned to project three-dimensional versions of images from her own mind, such as life-size images of the New Mutants training in the use of their powers.

Despite the fact that Moonstar had to probe a person's subconscious in order to discover the mental image she wished to project, she wasn't a true telepath. Although she could consciously initiate the mental probing in order to find and project an image, the probing process itself wasn't governed by her conscious mind. Hence, Moonstar did not consciously know what the image she sought in another person's mind was (in any more detail than that it was the image of the object of his or her greatest fear, or that it was the image of his or her ideal customer, or whatever) until its image actually appeared in three-dimensional form before her.

The three-dimensional images that Moonstar caused to appear were similar to holograms, although they were created by psionic energy rather than by lasers, and could be seen by anyone in their vicinity. However, only the people from whom Moonstar derived the images would perceive them as "real," indistinguishable from the real persons or objects they portrayed. To other people, the images were recognizable as immaterial illusions.

Moonstar could use her power to derive and project mental images on several people at once. Each "victim" would see a different image, corresponding to his or her own individual concept of the kind of image that Moonstar sought. If, for example, she sought to make a group of people each see the object of his or her greatest fear, probably each person in the group would see an image of a different person or thing. Probably if she caused each member of the New Mutants to see an image of Professor Xavier, each member would see a subtly different image, according to his or her own perception of Xavier's personality, handsomeness, and so forth. However, even though each "victim" in such a group would see only one image, Moonstar herself and anyone else in the vicinity would see each of the images drawn from the minds of each of the "victims."

The seeming materialization of the object of his or her greatest fear of desire invariably had immediate emotional impact on the person from whom Moonstar had drawn the image she projected. Moonstar's images dissolved and ceased to exist as soon as she ceased to maintain sufficient concentration to keep them visible.

Moonstar was limited in the use of her power by her need to see the person from whose consciousness she derived her images. She could use her power on a person even if he or she could only be seen by Moonstar through binoculars. However, she couldn't draw images from a person who was standing only a few feet from her, but behind something she couldn't see through. Nor could she derive images from a person whom she saw via live television but who wasn't actually within her vicinity.

At first Moonstar could not control her image projecting powers, and she would draw and project images without consciously willing to do so. However, she learned to control her power due to Charles Xavier's guidance and her own growing maturity, so that her power operated only when she willed it to do so.

Moonstar's ultimate potential was to be able to cause her three-dimensional images to become tangible entities of psionic force.

Moonstar could also use her power to derive and project images of the objects of fear or desire from the minds of animals. The only difference was that the animal from which she derived the image would be the only being to see it. She could even use this power on fish and certain insects, although not on animals with intelligence any lower than these creatures. Moonstar could derive mental images of her winged horse Brightwind's objects of fear and love even if Brightwind was beyond the range of her sight, and project such images to him over a great distance. The limits of her powers with regard to Brightwind are unknown. She summoned him in the past by projecting an image of herself, whom he loved, to him, even though he was out of her range of sights.

Neural Arrows: She could focus her psionic powers into energy arrows which can stun an opponent by disrupting their central nervous system, or force them to relive a traumatic memory.

Animal Empathy: Moonstar could achieve a quasi-telepathic rapport with higher animals including primates (but not including human beings), members of the dog and cat families (including wolves and mountain lions, for example), and birds. She could sense their feelings, consciously perceive images in their minds, and even see through their eyes. However, since an animal's ability to conceptualize is highly limited, she was limited as to what she telepathically could learn from an animal.

Moonstar also had a quasi-telepathic rapport with her winged horse Brightwind; possibly Brightwind had psychic abilities of his own that made the rapport easier. Though highly intelligent, Brightwind has an animal's mind, so Moonstar couldn't communicate with him telepathically in quite the same way she could with Wolfsbane when she is in her lupine form.

Death Sense: ability to perceive and sense the coming of Death. She could perceive a "deathglow" surrounding a person who was in serious danger of dying. Moreover, Moonstar could perceive Death incarnate, in whatever form it took to claim the person with the deathglow. A person surrounded by the deathglow was in danger of death, but might still be saved from dying (until he or she met his or her inevitable end at some later time under different circumstances).

Resist Death: Moonstar could challenge Death itself and death gods using a "Cheyenne ghost-shaft" made from her image powers.

Quantum Energy Manipulation: the ability to manipulate quantum energies to affect energy and matter on a subatomic level and fire powerful energy blasts.

Moonstar is a better than average athlete for her age, in large part because of all the times she has spent on her own in the wilderness. She has a fair knowledge of hand-to-hand combat, has enhanced durability, and is a particularly good horseback rider and swimmer.

Moonstar possesses the normal human strength of a girl of her age, height, and build who engages in intensive regular exercise.

Retrieved from "https://marvelcomicsfanon.fandom.com/wiki/Danielle_Moonstar_(Earth-1010)?oldid=253204"
Community content is available under CC-BY-SA unless otherwise noted.