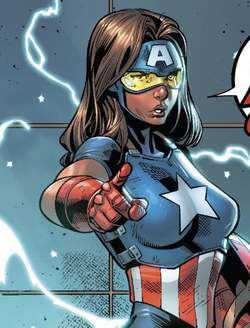 Danielle Cage is the daughter of Luke Cage and Jessica Jones. She was born indestructible, and it was clear from the beginning that she developed much faster than a normal human.

Luke and Jessica wanted to keep her out of harms way, especially after they started Heroes for Hire. But she hated being kept in the dark, and wanted to use her powers for good. That is why, when Riri Williams and Kate Bishop approached her with the offer to join the Young Avengers, she vehemently accepted.

Initially, she ran away from home and joined them, adopting the alias of the Patriot, fashioning herself after Captain America. Of course, after the Young Avengers made their public debut, Danielle returned to her parents in order to make amends, but she wanted to make it clear that she intended to continue being a hero, with or without their blessing. Jessica was hesitant, knowing what the life of a hero entails, but Luke was able to convince her that she could handle herself, and if she couldn't, she had a good team and overprotective parents to defend her.

Retrieved from "https://marvelcomicsfanon.fandom.com/wiki/Danielle_Cage_(Earth-101)?oldid=250022"
Community content is available under CC-BY-SA unless otherwise noted.