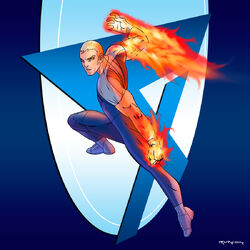 Crystal and Human Torch fell in love when they met on the Fantastic 4. She eventually moved on from Johnny, however, and settled down with Quicksilver. She would have his daughter, Luna, who would eventually join the team. But, Quicksilver proved unfaithful, and she fled back to Johnny. He happily took her back, and they were able to resume right where they left off. Daniel was the result of this encounter. However, because Crystal had children with 2 different men, she was shunned by her race. She had no place to go, so she decided to stay in the Baxter Building. She was offered membership on the team, but for an unknown reason, she declined. She still allied with the team in most fights, though.

Daniel loved growing up among the Fantastic 4. He loved bugging the team, especially Peter, She-Thing, and Franklin, because he felt they were particularly easy targets. He was soon put in the hospital by She-Thing when her powers developed. But he didn't care, he left the hospital as soon as the nurse said it was OK, and he ignored all other doctor advice. But when his powers developed, he began pranking others in a more dangerous fashion. His father found out, and had him fitted with a power dampening collar that he could not take off. After it was removed a year later, he used his powers only in the ways his father approved, for fear of what he might do next.

Daniel continually proved his mettle in the field. He had full mastery of his powers, and he showed it well against Dr. Doom, his 2 heirs, and Iron Lad. There were always people to fight, and always new aspects of his powers to test. But the arrival of Luna Maximoff set things off. She declared that she wanted to be a part of the team. The 4 were reluctant, but after some discussion, she was allowed to join. Then she stated that she would not be a long-time member of the team, and she would not be willing to wear a Fantastic Four uniform. Daniel tempered quitting so they could remain the Fantastic 4, but his teammates forced him to reconsider. They would instead wear their current uniforms, let Luna wear hers, and refer to themselves in the field as "F4 and trainee." This, they decided, was a worthy punishment for such a rebel.

Elemental: Daniel has the mutant power to control the elements. He has mostly developed his fire powers, as that has more applications, but he is well-versed in all his powers.

Hydrokinetic: Dan has the ability to manipulate water. When merged with his fire ability, he can generate large amounts of steam, disguising his presence and allowing him to float. He can shape water into nearly any form.

Geokinetic: Dan can shape the Earth to his will, causing earthquakes, or riding the ground.

Pyrokinetic: Dan can generate and douse fire at will. His control over fire is so precise, that he exceeds even Pyro in generating fiery shapes. He can also shift his body into a fiery plasma form that allows him to generate fire blasts and fly at superhuman speeds.

Retrieved from "https://marvelcomicsfanon.fandom.com/wiki/Daniel_Storm_(Earth-1175)?oldid=256369"
Community content is available under CC-BY-SA unless otherwise noted.