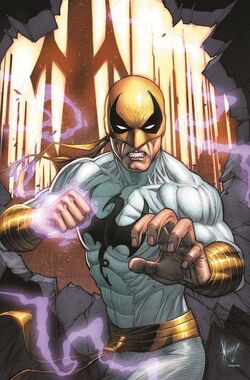 Well, now I'm an Avenger, but only after being handed the reigns when the greatest man moved on. I wonder who might answer when the first Avengers Assemble! is yelled.

Iron Fist's history is the same as that of Earth-616's Iron Fist up until the Marvel NEW! relaunch.

After Luke Cage quit the New Avengers in favor of the New Warriors, he handed the team over to Iron Fist. With a blank slate, he recruited Falcon, Thunderstrike, Blue Marvel, Ms. Marvel, a new Ronin, and (who he thought was) Quicksilver. He was able to vastly expand his chi and martial arts abilities while with the team.

Chi Manipulation: Iron Fist retains his chi manipulation powers, though they have been strengthened from extensive training:

Retrieved from "https://marvelcomicsfanon.fandom.com/wiki/Daniel_Rand_(Marvel_NEW!)?oldid=84216"
Community content is available under CC-BY-SA unless otherwise noted.