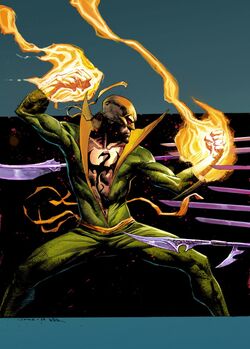 I became one in a long line... of Immortal Iron Fists...

Daniel Thomas "Danny" Rand-K'ai was the only child of the owners of Rand Enterprises. Rand tragically lost his parents in a plane crash (a plot that was secretly concocted by his father's business partner and one-sided rival, Harold Meachum) which resulted with the young Rand being rescued by mysterious monks and taken to the interdimensional city of K'un-Lun, where he was trained for several years both alongside and against his brother-in-arms Davos, in order to face the dragon known as Shou-Lao the Undying. With his victory, he eventually took the title of the Immortal Iron Fist during the great modern age of heroes.

Rand returned to New York City to reclaim his name, and soon fell into conflict against the diabolical Hand when he had learned that a mysterious elder woman by the name of Madame Gao was using his company to sell her own heroin. Rand challenged Gao and soon joined forces with his father's ally Harold Meachum and the Hand warrior and commander Bakuto. However, both Meachum and Bakuto soon turned against Rand, wishing to use the power of the Iron Fist for their own purposes. This forced Rand to defeat them both with the help of his newfound allies; his new friend and lover Colleen Wing, to his old friend and eventual nemesis Davos.

Having at last fulfilled his mission to defeat the Hand, or at least a small portion of it in actuality, Rand returned to K'un-Lun with Colleen Wing, only to discover that the gate to the city has been closed while he was gone, not knowing that the city had fled due to a massive attack led by the Hand themselves.

Despite the sudden mysterious disappearance of K'un-Lun, Danny and Colleen would begin their new quest to investigate the Hand and its possible return, searching the globe for any new leads to the ancient organization, only to find few traces of their recent remnants. While he was on a mission to confront and deal with a group of triad criminal organizations, he came across the assistance of the vigilantes Daredevil, Jessica Jones, Black Cat, Punisher, Power Man, Moon Knight, Cloak and Dagger.

In the wake of the heroes' first assembly, the small team, now dubbed as the Defenders, somehow gained recognition among several communities in New York, but eventually, due to some confrontations with the authorities, the team went into a momentary hiatus and every member of the team went off into solo heroics, at least for the time being.

Danny, along with the founding founders of the Defenders, had eventually managed to reform in the meantime, and have come to help the Avengers and S.H.I.E.L.D. defeat Loki and the invading Chitauri Army, despite their situation against the lawful authorities. With the best efforts of both parties, the Chitauri Invasion was thwarted once and for all, and the Earth was saved, thanks to its mightiest and most fearless heroes who bravely helped defend it.

A few years later, the Hand suddenly made their return by using the last known samples of the resurrection substance to bring back the recently-deceased Elektra and a few more individuals, in order to serve the Hand as their new "Black Sky." In order to find more of this mysterious substance, the five "fingers" of the Hand had gathered once more in New York City and tried to catch Danny so he would open the gates for the substance. However, the Defenders arrived at the scene, just in time, in order to stop them from chaotically destroying the city in the process.

As the Hand reached for the substance, Elektra unexpectedly betrayed the Hand for her own purposes, ultimately leading them to their doom, when the Defenders successfully buried the rest of the leaders underground. The Defenders, with the help of Elektra, were successful once more in their heroic objective, saving New York once again from ashes, and the Hand was seemingly dismantled. However, unknown to these heroes, the remaining superiors of the Hand survived the crumbling collapse caused by the Defenders, and even managed to collect some of the resurrection substance to continue starting over again, to rebuild a better Hand, under the influence and guidance of their returning ancient founder, Gorgon.

As a response to in the worsening situation, while the rest of the Avengers handles the threat ongoing at the cities of New York, Iron Fist and the Defenders, teaming up with Spider-Man, have reassembled in continuously finding out the planned threat of the Movement faction of Hydra, to which they have carefully discovered the terrorist organization had been planting several highly-armed explosives planted in several buildings and sewers across New York until they finally succeeded in doing so, just as the rest of the Ultimate Alliance have ensured victory and justice against defeating the forces of evil across the globe.

Years after fighting against the ancient Hand, all the remaining great evil Rand was left in dealing with was none other than his old friend and nemesis Davos, and upon discovering the latter's return to New York to find the Iron Fist once again, he was warmed and armed up to bring his old brother into justice with his fists of righteous vengeance. Unfortunate for Rand, his expectations were immediately subverted by his reunion with Davos, as the man who grew with a passion of embittered hatred for him has now reintroduced himself as a reluctant ally, seeking Rand's help in a far greater threat, more than he was throughout their years of rivalry. Elaborating his intentions, Davos suddenly brought back their mystical home K'un-Lun, something that Rand has never moved on nor have forgotten since he left it. Informing that K'un-Lun was under attack by a powerful man they never expected would actually invade their home, the Mandarin, who has grown a seed of interest in the internal energy that was chi, along with finding out more power across the Seven Capital Cities of Heaven, hidden cities on Earth which included K'un-Lun.

Impulsively eager and desperate to save the very home he thought was entirely gone at any cost, Iron Fist as they unavoidably crossed paths with Iron Man, who was never more than determined to bring his arch-nemesis' reign of terror anywhere to an indefinite end, once and for all. Throughout their journey across the Seven Capital Cities of Heaven through entering K'un-Lun in the Himalayas, Rand, Davos, and Stark was unfortunate to find out that they were too late in preventing the Mandarin's havoc on his old home after discovering most of the city in ruins, albeit his former masters were nowhere to be found among the scattered bodies across the holy city. Traveling to the Cave of the Dragon for more clues, they found the last living H'ylthri outside as it protected the cave by sealing and hiding the entrance with its vines, the dying creature whose hailed as one of K'un-Lun's sworn enemies have greatly warned Rand to protect the cave from the Mandarin, revealing that the invasive villain was not yet done with K'un-Lun since he also seeks to find Shou-Lao The Undying, the very dragon that granted the power of the Iron Fists, and absorb all of its essence. With one last warning from the dying H'ylthri, Rand was informed that the Mandarin has also planned to initiate an all-out war against the rest of the Seven Capital Cities of Heaven, and thus K'un-Lun was only the beginning of his conquest and pursuit for mystical power.

Chi Augmentation: Through concentration, Rand can harness his mystical chi to augment his physical and mental capabilities to superhuman levels. Danny Rand defeated the mystical dragon Shou-Lao in combat, thus branding himself with the dragon's mark on his chest. He then plunged his fists into the dragon's molten heart, absorbing its chi which he can wield for various purposes in his role as the immortal weapon, the Iron Fist. After further study with the Book of the Iron Fist, he has since reached truly superhuman levels of physical activity.

Retrieved from "https://marvelcomicsfanon.fandom.com/wiki/Daniel_Rand_(Earth-61615)?oldid=264274"
Community content is available under CC-BY-SA unless otherwise noted.