I am the Immortal Iron Fist!

After his parents were murdered by the secret ninja clan, the Hand, Danny Rand traveled to K'un-Lun and trained to master the Iron Fist. He has then set out to avenge his family as a hero, eventually being recruited by Nick Fury to join the Ultimate Alliance. 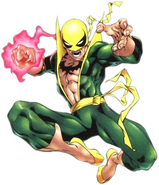 Ultimate
Add a photo to this gallery
Retrieved from "https://marvelcomicsfanon.fandom.com/wiki/Daniel_Rand_(Earth-6110)?oldid=252180"
Community content is available under CC-BY-SA unless otherwise noted.