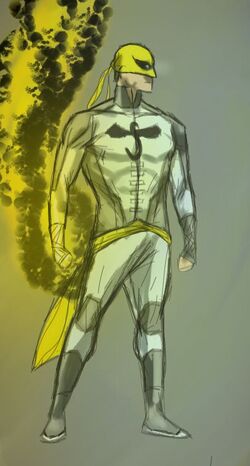 My moral compass tells me we shouldn't be taking people's money to help them... but my bank account disagrees.

Danny Rand is the son of wealthy businesspeople, and owners of Rand International. Unbeknownst to Danny, their families company had become a front for the secret organization, the Hand. When his parents tried to reveal the truth, they were killed in a plane crash.

Devastated, Danny began searching for answers. His entire life, Danny had everything handed to him on a silver platter, and he decided it was time to start earning for himself. His search led him to the mystical land of K'un-Lun, which his father used to tell him stories about as a child. He had never believed it to be real, but after being welcomed in by the monks, Danny began training.

After spending years in K'un-Lun, he was deemed worthy of becoming the Iron Fist. After passing the necessary trials, he was brought to the corpse of the ancient dragon, Shao-Lou, and plunged his fist into his heart. The sensation burned, but also empowered him with the power of the dragon. Finally feeling prepared to take on the Hand and avenge his parents, the Iron Fist ventured back to America.

When Danny Rand made his return in the public eye, he was instantly bombarded by Hand agents who attempted to kill him. Iron Fist fought them off and decided if he was going to defeat the Hand, he couldn't do it alone. As he still had access to his parents' fortunes, he sought out the private investigator Jessica Jones, and her body guard, Luke Cage, for help. The three of them then began working together to bring down the Hand, and eventually Danny had the idea of bankrupting the company in order to diminish their resources.

This led to a prolonged confrontation between Iron Fist, Luke Cage, Jessica Jones, and the Hand. Eventually, the Hand's commander, Nobu, ordered a retreat, leaving the company in Danny's hands. He then formed a partnership with Luke and Jessica and, as he was now penniless, pitched the idea of converting the company into "Heroes for Hire, Inc."

Since then, they have begun selling their talents to the highest bidder who needs help from a hero. They have continued to recruit more and more heroes, and eventually Danny handed over ownership of the company to Luke, believing he was more suited to lead.