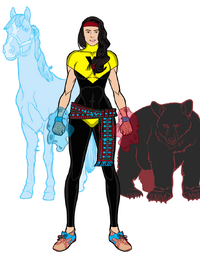 Danièle Montour - or Dany for short - was born to the Chippewa-Cree tribe stationed in the Rocky Boy Indian Reservation found in northern Montana. Dany is a mix of the Ojibwe (Chippewa), Plains Cree, and Métis peoples located on this reservation. Through her Métis ancestry, Dany has French & Scottish fur-trader ancestors who married and procreated with the indigenous Algonquin peoples of North America creating their own unique ethnic group & culture. As such, Dany is an admixture of a variety of indigenous groups to North America as well as to European colonizers.

Dany possesses the normal human strength of a girl of her age, height, and build who engages in intensive regular exercise.

Retrieved from "https://marvelcomicsfanon.fandom.com/wiki/Dani%C3%A8le_Montour_(Earth-515)?oldid=255932"
Community content is available under CC-BY-SA unless otherwise noted.