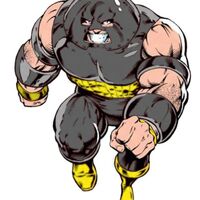 YOU WILL WORK FOR ME, you will not be this assassin anymore, but my henchman.

Early Life and Trip to Asgard

Little is known about Dane's childhood, except that his parents were mugged by Antonio Rodriguez who decided to give the money back, and that he was the cousin of Natasha Romanoff.

After finding out that Natasha had become the new Thor (the original one died two millennia ago), she took him to Asgard, but he didn't quite like it on Asgard and only spent three days there.

After somehow finding the Crimson Gem of Cyttorak, he became an assassin, and was hired by Jennifer Walters to kill Antonio Rodriguez, but he couldn't go through with it because he recognized him as the mugger who mugged his parents but gave the money back. Shocked, Jennifer brainwashed Dane into becoming her henchman. Dane went and got the Bluecloak Nautom Crystal for Jennifer, who then rebranded herself "Shahonda" after becoming the avatar of the Bluecloak Nautom. During that time, Dane continued to serve as her henchman.

Natasha then became Dane's next target, but he regained all of his memories after trying to kill her. Natasha was forced to kill Dane while under Jennifer's mind-control spell. Natasha then took the Crimson Gem Of Cyttorak, rebranding herself "Lady Whitman" in his honor.

He gained the powers of the Crimson Gem, including the following:

Retrieved from "https://marvelcomicsfanon.fandom.com/wiki/Dane_Whitman_(Earth-37U)?oldid=262170"
Community content is available under CC-BY-SA unless otherwise noted.