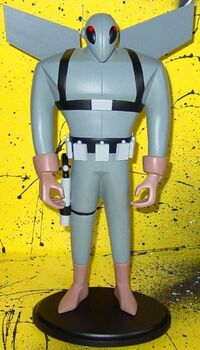 Dane was born in Canada and lived there until he was three. After that, his father (a scientist working on bioelectric energy) got a job at Princeton University. When Dane was six his father died in a car crash which had a big impact on Dane, he started becoming rebellious and angry. His mother also had to get a job as a maid which made them very poor. Dane had no friends and was bullied a lot at school and made fun of. That was when his pyromaniac streak showed.

One day in the 8th grade he was in science class and they were learning about fire, but Dane let his fire get out of control because he didn't want to put it out. That's when he became obsessed with fire because it was his only friend, it warmed him and comforted him. He soon bought a lighter and started smoking. One day he was beat up by the school bully and the bully broke his lighter which made Dane mentally unstable. Later that night Dane bought a new lighter and brought two torches with him to the bully's house and burned it down with the family inside, and their charred bodies were found by the police. Nobody knew who did it. So for many years if someone bullied Dane or angered him he would kill them by burning their house down.

Years later Dane was accepted into Princeton University where his father used to teach. After one of his classes were cancelled because the professor quit, he decided to join a class on what his father did, bioelectric energy, but after a few weeks into the subject his teacher was talking about his father and how stupid his father's theories on bioelectric energy were which made Dane very mad. That night Dane went and started to burn the professor's house down but the professor saw him and tried to escape. A piece of the house fell on him and Dane left him for dead, but when the police found him and discovered he was still alive. The professor told the police what happened and they tried to arrest Dane but he escaped. He later became an arsonist for hire. After years into the job, he was inspired by fireflies. He made a bulletproof and fireproof suit with radar and heat sensing, and a communications device, he also made jetpack that sounded like a firefly equipped with rockets and for weapons he made fire-bombs, a gun that shoots fire, smoke grenades, and a combat knife. With this new equipment he became the Firefly, the pyromaniac mercenary. And so he became a mercenary for many years and was later hired by The Outsiders. But in their first battle against the Chitauri he was killed.

None, he uses a suit along with weapons.

He possesses the a little above average strength due to his training as a mercenary.

Equipment: Dane has a suit which is bullet and fireproof and also has radar and can see heat signatures plus a small radio headset.
Transportation: Dane has a jetpack which sounds like a firefly buzzing. It is equipped with two rocket missiles.
Weapons: For weapons Dane has fire-bombs, smoke grenades, a small flamethrower, and a combat knife.

Retrieved from "https://marvelcomicsfanon.fandom.com/wiki/Dane_Mason_(Earth-717)?oldid=171315"
Community content is available under CC-BY-SA unless otherwise noted.