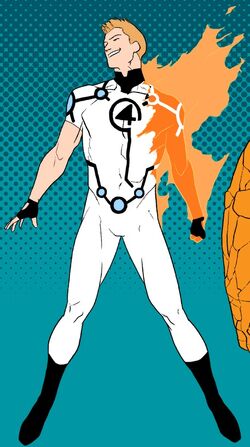 Unknown
Occupation
Adventurer, former pilot
Origin
Origin
Pyrokinetic superhuman who founded the Fantastic Four in 2099 and journeyed to the present to replace the deceased Four.
Creators

I was and am the best pilot on Earth. I have always played with fire. And now I can play with as much as I want.

Damon Chester had a very normal childhood, despite the fact that he was born in 2077. He was always fascinated by air travel. As a child, Damon would also pretend to be a superhero. He was accustomed to being shunned for his interests. So, Damon would often entertain himself in pretending to fly or becoming a superhero. One thing he always had, though, that gave him a basic level of respect, was his education. He used this to make his way through life: using that as the start to a successful career as a pilot.

But he was soon assigned a very dangerous task. He was to test a new spaceship that could supposedly even leave the Milky Way. Feeling confidant, he agreed to test it. But the day before the flight, he looked over the formula to create the point, and it was off in a few decimal places. It was too late for him to back out, though. In the flight, all seemed to be going well. But once it was about to leave Earth's atmosphere, the top came off, and the air rush pushed it backwards. The ship crashed to the ground, and Damon survived, but just barely. All of his skin had burned off, and he would be confined to a hospital bed for the rest of his life.

A man calling himself Erskine ran into his hospital bed not long after the crash, and offered him his former life. He accepted, and gained a new metal-mesh skin that would supposedly be indestructible. As soon as he left the hospital, he burst into flames and levitated. The difference was that this time, Damon felt no pain. He reached the doctor, and asked if that was intentional, to which he replied, "Not exactly," and was given the phone numbers of 3 other patients who had developed "side effects." In reality, the doctor had lied: his skin was constructed to be similar to that of Jim Hammond: the Invaders' Human Torch. They banded together to become 2099's Fantastic Four.

The team saw many awesome years of crimefighting, always handling major threats, and becoming a huge sensation in the public eye. But soon, it became apparent that the world had too many heroes, and the Fantastic 4 faded from the limelight. they rarely entered battle, and soon became bitter with their situation. But the man known only as Kang soon approached them with the deal of a lifetime: they could replace the deceased Fantastic 4 of the present (their past). This would keep the timeline stable and would allow them to fight crime again. It was a unanimous agreement, and they were warned that mutations might occur in the journey back. In passing, Blue Flame's fire was turned orange, and was much less potent. But he still was widely known as Scorch: the hottest of the Fantastic Four.

Flight: Torch can superheat air currents, allowing him to fly through them.

Fire Blasts: Torch's skin can secrete fiery plasma, project it from his hands or other parts of his body, and control them once they leave.

Time Travel: All members of the Fantastic 4 have the ability to travel to 2099 and back.

Scientist: Damon is skilled in most sciences, though not quite to the level his teammate Philip once reached.