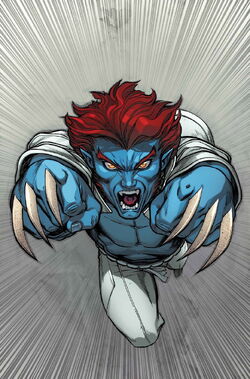 Earth-50911
Base Of Operations
The Nexus
Characteristics
Gender

I'm the best of the best that the X-Men and the Brotherhood have to offer... so why do I always feel like I'm the worst?

In a world where nuclear war began sterilizing mutants, many of them attempted to have as many children as possible to preserve their race. One of these children was Damian Creed, the son of vicious killers Sabretooth and Mystique. From a young age, his parents trained him to be a killer, like them, but it wasn't long until the war separated them.

Sabretooth was slaughtered by Russian soldiers, who had repurposed Arc Reactor technology to build their own Iron Men, and Mystique ended up being captured by the Hellfire Club, who intended to use her unique DNA to breed more mutants. This left little Damian to fend for himself. He eventually found his way to Yancy Street, where Ben Grimm was running an orphanage for homeless powered children. Damian had been taught to never rely on anyone else, and even initially attacked Grimm. He refused to fight back, and talked Damian down until he broke down in tears. He felt lost and purposeless, but the Thing promised to help him find one.

Thing was eventually able to get into contact with his old ally, Wolverine, who had been in hiding ever since the X-Men were wiped out. Wolverine agreed to take Damian in, and to teach him about mutant history so that he would have a better idea of where he came from, and who his parents truly were. As he reached maturity, he mastered his shape-shifting abilities and was trained in self-defense by his new father, Wolverine.

He eventually adopted the name Predator and set out to free as many remaining mutants from captivity as he could. This crusade eventually led him straight into the den of a horde of Russian Iron Men. He fought valiantly for as long as he could, but was eventually overrun by the barrage of lasers and missiles, that seemingly claimed his life.

However, the Predator had actually been plucked out of his reality by the Silver Sentry and placed on Team X, the reality-hopping group of ragtag mutants and heroes dedicated to righting wrongs across the multiverse. Although he initially had rough relationships with his teammates, due to his parents in their realities being some of their fiercest enemies, but was eventually able to gain their trust by proving on multiple missions how selfless he was.

He even formed a genuine friendship with Sub-Zero, bonding over their pasts as mercenaries and assassins. However, Predator was dismayed when Sub-Zero met his end on a mission, and was replaced by Magnus. However, Magnus went through a similar crucible as Predator did, being the son of Magneto, and having to prove himself to the team. Predator, however, gave him the benefit of the doubt from the start, and the two came to trust each other with their lives. Damian even began to develop feelings for him, but was hesitant to express them.

Eventually, Team X found themselves in a reality where the Red Skull had commandeered the New York City power grid to open a portal to Mephisto's Realm in an attempt to destroy all opposition to Hydra's reign. Team X initially tried to reason with the Skull by convincing him that Mephisto was on his own side, but it was pointless. Eventually, the portal grew too much for him to control, and Mephisto began to break free.

Team X attempted to short-circuit the power grid, but all attempts proved unsuccessful. Eventually, Predator and Magnus were able to push Mephisto back far enough to close the portal, but they were both too close to the demon to escape safely. As the hellfire surrounded them, Damian decided to spend his last seconds doing the one thing he had always wanted to; kissing Magnus.

Retrieved from "https://marvelcomicsfanon.fandom.com/wiki/Damian_Creed_(Earth-50911)?oldid=252800"
Community content is available under CC-BY-SA unless otherwise noted.