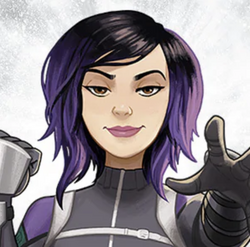 The whole world is freaking out over mutants enslaving and murdering humans, robots rising up against the mutants... no one feels safe anymore. Who better to save them than a team of Inhumans?

Daisy Johnson was raised by her father, Cal, in China after her mother died when she was young. Daisy became a very caring, and very intelligent woman. Her father told her the truth about her Inhuman heritage when she turned 18, and gave her the choice of going through Terrigenesis. She decided to hold off, as she didn't want to be reliant on her powers, and instead became an Agent of S.H.I.E.L.D., quickly rising up the ranks and becoming one of Nick Fury's most trusted lieutenants. After Apocalypse began amassing power, Daisy decided to go through Terrigenesis to be of more help, and emerged with the ability to manipulate vibrations and the Earth itself.

She fought hard, but after the fall of S.H.I.E.L.D., she went into hiding to formulate a plan with Fury. They quietly began recruiting other Inhumans to form the Secret Warriors, a strike team that would hit Apocalypse's strongholds hard and fast. After Fury's capture by Ultron, Quake expanded the team's membership to beyond just Inhumans, and began to help the Avengers without them even knowing it.

After liberating several humans and Inhumans from the camps who did not want to join the Warriors, but had no place to go, Quake was struck with an idea. She and her team set out to find land untouched by both Apocalypse and Ultron, which they turned into a safe haven called "New Attilan". They set it up as a place for refugees from Apocalypse's death camps, and eventually ended up relocating there permanently to protect them.

Unrestrained Use of Power can Damage Arms

[[Category: In a relationship with Dante Pertuz Characters]]
Retrieved from "https://marvelcomicsfanon.fandom.com/wiki/Daisy_Johnson_(Earth-9999)?oldid=246094"
Community content is available under CC-BY-SA unless otherwise noted.