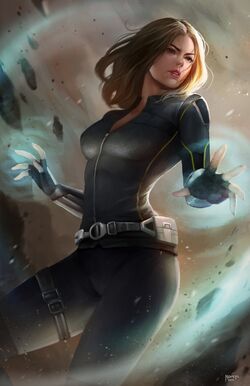 You know that song "rock you like a hurricane"? Yeah, that's pretty much my life motto.

Daisy Johnson was barely able to graduate High School due to her inability to care. However, her genius intellect helped her to hack into the school's mainframe and put her at the top of the class. Potts International was ecstatic when they discovered Daisy had Inhuman DNA. In turn, Daisy was ecstatic to be given superpowers, and gained the ability to create tremors with her mind, being dubbed "Quake".

Daisy was relocated to Chicago and became the poster hero of that city. She is one of the few Potts heroes with something of a moral compass, stopping her from carrying out the dirtier missions. However, she is willing to tamper with enemy technology as she just finds it amusing.

She eventually gets wrapped up with the Avengers, who blackmail her into giving them inside information about Potts, which partially sways how she views the organization. But she is then threatened back into working for Potts exclusively when Iron Man threatens her life.

Retrieved from "https://marvelcomicsfanon.fandom.com/wiki/Daisy_Johnson_(Earth-1515)?oldid=244493"
Community content is available under CC-BY-SA unless otherwise noted.