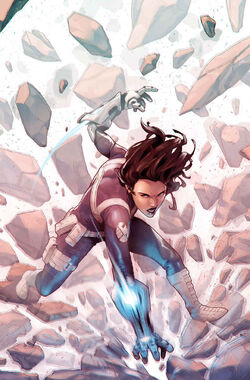 Earth-1400
Base Of Operations
The Outside
Characteristics
Gender

Time to shake things up a bit.

Daisy Johnson is the daughter of serial killer Calvin Johnson. She was raised in the foster system and only discovered her true identity in her early twenties after joining S.H.I.E.L.D. She would also later discover her Inhuman DNA on a mission and was exposed to terrigenesis, becoming a special agent named Quake. She would go on to work her way up through the ranks and eventually become the Director of S.H.I.E.L.D. following Nick Fury's death.

Quake would be recruited into the Outsiders under the threat that if she returned to her reality, she would be assassinated by Bullseye and S.H.I.E.L.D. overthrown by Hydra. She accepted the call to action and became an Outsider, working alongside the team until they gained access to the Outsider's Palace. Quake decided to retire from active duty and begin coordinating the team from the headquarters. She then scoured the multiverse and decided to recruit Black Widow to take her place on the team.

When the Outsider decided to pit the Outsiders and the Renegades against each other, Quake was initially barred from competing due to her status as the team's coordinator. However, when Doctor Doom began to gain the upper hand, Quake forced herself into the fight to protect them, only to be impaled from behind by Deadpool, who would end up taking her spot on the Outsiders.

Retrieved from "https://marvelcomicsfanon.fandom.com/wiki/Daisy_Johnson_(Earth-1400)?oldid=245807"
Community content is available under CC-BY-SA unless otherwise noted.