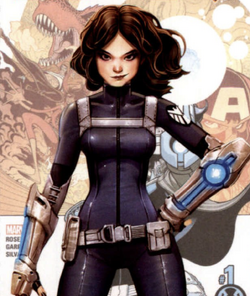 I mean, I kinda figured that being an Agent of S.H.I.E.L.D. was like a stepping stone to becoming an Avenger, but I found a purpose here that I didn't think was possible. I'm honored to serve with you, sir.

Born to geneticist Cal Johnson and Inhuman Jiaying, the baby that was supposed to be named Daisy was abandoned when their family was split up by Hydra. She ended up in America at St. Agnes' Orphanage, where they named her Mary Sue Poots.

At the age of 16, "Mary Sue" renamed herself Skye and ran away to join a hacktivist group called the Rising Tide. Over time, she got on S.H.I.E.L.D.'s radar, and ended up being recruited for a special mission by Phil Coulson, who she eventually came to see as a father figure.

Working with S.H.I.E.L.D., she ended up making her way around the world, and was eventually tracked down by her father, who revealed the truth about her heritage and how she was an Inhuman. While Hydra had coerced him into working for them to uncover an ancient Inhuman temple, he was secretly only helping them to help Daisy evolve. After going through Terrigenesis, she manifested the ability to create vibrations that shook the very Earth.

She finally accepted her real name, Daisy Johnson, and adopted the code name Quake. After the confrontation in the abandoned city resulted in her father being placed in S.H.I.E.L.D. custody, which broke her heart, just as much as when she discovered Hydra had cut apart her mother to experiment on her.

Not long after she was inducted as an official Agent of S.H.I.E.L.D., she was approached by Director Nick Fury, who wanted to place her on his special ops team that he was assembling to replace the absence of Hawkeye and Black Widow, the Secret Warriors.

Retrieved from "https://marvelcomicsfanon.fandom.com/wiki/Daisy_Johnson_(Earth-101)?oldid=250541"
Community content is available under CC-BY-SA unless otherwise noted.