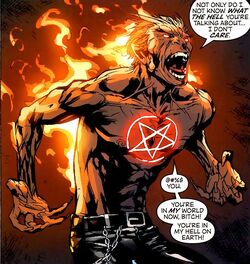 The Son of Satan
Identity

Please, I could care less about raising the devil, I'm just here to have some fun!

When a demon from the Dark Dimension named Marduk escaped into the physical world, he found a cult that worshiped Dormammu located in Texas. He was instantly welcomed by them, and propositioned to sire a child to act as his avatar in the physical world. Marduk agreed and mated with one of the cultists, Victoria Hellstrom, who became pregnant with his child.

When the baby, named Daimon, was born, Marduk's spirit was reanimated into his body, instantly empowering him with enough hellfire to burn his mother to a crisp moments after he entered the world. For the next several years, he was raised by the cultists who attempted to teach him to hone his powers. However, they all proved inadequate and powerless to stop him from killing them all. He decided to venture to Kamar-Taj to learn how to hone his inner power from a master.

While there, he convened with the Ancient One, who was able to hide his true heritage from. She taught him the secrets behind his connection to the Dark Dimension, but was too late in realizing who he truly was. He was able to fight off the Masters of the Mystic Arts and, now that he could control himself, decided to live his life the way he wanted to, by moving to Las Vegas and getting drunk every night, using his powers to trick people into thinking he was a magician.

However, this only lasted for some time as he eventually attracted the attention of the Ghost Rider, who was in allegiance with Doctor Strange. Hellstorm hated what they stood for, and became fierce enemies with them for years, until their interests aligned when Dormammu set his sights on Daimon. He wanted to retrieve the spirit of Marduk and reabsorb it into the Dark Dimension to make himself more powerful, but Daimon didn't want to be Dormammu's stooge.

Daimon went to the Masters of the Mystic Arts for help, and worked alongside them in fighting off the spirits and Mindless Ones of the Dark Dimension. They were eventually successful in closing off the portals, and Daimon agreed to help Doctor Strange in the future should he need assistance. In return, Strange and Clea enchanted him with a spell that would mask the spirit of Marduk, and prevent anyone from finding him.

Retrieved from "https://marvelcomicsfanon.fandom.com/wiki/Daimon_Hellstrom_(Earth-101)?oldid=250184"
Community content is available under CC-BY-SA unless otherwise noted.