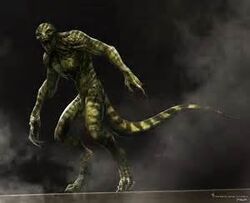 Little is known about the Lizard's life before joining the Masters of Evil. It can be assumed to be similar to his mainstream counterpart as his lizard personality appears to be in control.

Lizard & Scorpion were stationed in Asgard, put in charge of guarding Tyr. Both were defeated by the Ultimate Alliance and placed in S.H.I.E.L.D. custody.

Lizard was among the supervillains forced into the Thunderbolts & put under nanite supervision by S.H.I.E.L.D. in order to back up the SRA. During the White Star's assault on Prison 42, the Fold revealed itself and used the infected Thunderbolts to round up heroes for assimilation. Lizard was put in charge of guarding the portal out of the Negative Zone along with Whirlwind, Diamondback, Moonstone, Electro, Scorcher, and the Grey Gargoyle.

Sometime after the Civil War, Lizard's appearance started to become more humanoid and was contacted by fellow Spider-Man villain, Doctor Octopus. He asked of him and four other Spidey enemies to become part of his Sinister Six team. Lizard accepted, wanting back at S.H.I.E.L.D. for the events of the Civil War. However, they were forced to join forces with the Ultimate Alliance after the discovery of the Skrull's Secret Invasion.

Lizard was sent as a reinforcement to a UA team (Cyclops, the Living Laser, Storm, Iceman, and the Crimson Dynamo) sent to the San Diego Zoo. Connors discovered in a bunker underneath the zoo and drove off another supervillain team, the Ani-Men. He also helped the five defeat his former pet, Iguana.

The Alliance tracked down the Ani-Men to an abandoned area in Hell's Kitchen. A squad composed of Lizard, Cyclops, Iceman, and his longtime foe Spider-Man; was sent to rendezvous with Luke Cage & Iron Fist. But upon arrival, they discovered that this is a supervillain hideout, and are subsequently ambushed by the Griffin. He was quickly defeated, but the team were confronted by the Shocker and Mister Fear, who are soon knocked out by Luke Cage & Iron Fist. The six storm the base, defeating along the way Tiger Shark, Armadillo, both Blackouts, Mentallo, the Purple Man, the Controller, the Wizard, and Madame Masque; until finally confronting the man coordinating the group, the Hood. It appeared that the Ani-Men, as well as the Wrecking Crew (who were imprisoned in the Vault before the breakout), have been convinced by the Hood into a supervillain crime syndicate. The Hood is defeated, but it's soon revealed that another member of the gang, the Slug, had already been replaced by a Skrull, having been trained with strong mental blocks to protect his mind from mental detection by the Hood. The Skrull tried to contact help, but was discovered by the Hood and killed. In the confusion, Hood managed to teleport him and the gang out of the base.

Connors has a genius-level intelligence and is a world renowned herpetologist. Although he has had no formal combat training, his powers alone coupled with his natural savagery in his transformed state make him a formidable combatant.

Lizard's strength and agility are reduced when exposed to intense cold for more than a few minutes. High levels of stress can cause Dr. Connors to transform into the Lizard.

Retrieved from "https://marvelcomicsfanon.fandom.com/wiki/Curtis_Connors_(Earth-6109.2)?oldid=259340"
Community content is available under CC-BY-SA unless otherwise noted.