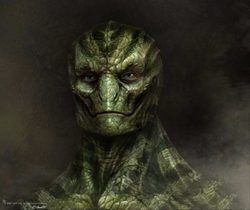 Earth-121245
Base Of Operations
The Outside
Characteristics
Gender

I am the Superior life form. I have rendered evolution a tool to be used by all lizardkind.

Curtis Connors lost his right arm while serving in the army, and eventually went on to work at Oscorp to try and find a way to grow it back. This led to him experimenting with Lizard DNA, and injecting himself with a modified sample. Initially, it was a success and his arm regrew. His wife, Martha, was hesitant to accept it as a success, and was horrified when Curt continued to mutate into a lizard creature. Soon, his Lizard DNA took over and his genius was warped. Believing it was his responsibility to help humanity evolve by mutating them all into lizard creatures, he was opposed by the hero Spider-Man. After a few encounters, the Lizard gained the upper hand and ripped out Spider-Man's heart, proceeding with his plan. However, Martha confronted him and begged him to stop. When confronted with his own humanity, he turned away from it and devoured Martha whole, succeeding in mutating the entire planet, becoming the Lizard King.

He was eventually recruited into the Renegades by The Outsider under the promise that if he returned to his home reality, his subjects would begin mutating back into humans. Wishing to preserve the kingdom he'd built, Lizard joined the Renegades and went on a few missions with them.

However, he would eventually meet his end when the team was sent to a reality where the island of Krakoa began expanding to encompass the entire Earth. Before the mission to destroy the island could be completed, both Lizard and Black Panther were devoured by the island.

Retrieved from "https://marvelcomicsfanon.fandom.com/wiki/Curtis_Connors_(Earth-121245)?oldid=259339"
Community content is available under CC-BY-SA unless otherwise noted.