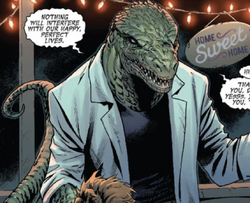 Look at the world around us, Peter. People flying through the skies in suits of armor, mutants establishing their own nation on a living island. Aliens pillaging the Earth every other day. It's time for humanity to evolve.

Not long after the birth of his son, Billy, Curt Connors was selected to act as an on site medical technician in an active war zone. During his time stationed there, he was caught in a misfire, which claimed his right arm. He was honorably discharged, and returned home.

Not letting his injury define him, he and his wife, Martha, decided to set up shop in the science labs of Empire State University, where they were provided with resources beyond their wildest dreams.

They eventually hired Peter Parker and Gwen Stacy as interns, and Curt was blown away by their minds, and excited for the potential they offered the future. However, unbeknownst to the interns and his wife, Curt had been experimenting in secret with cross species genetics, having become inspired by Peter's father, Richard, who used to work on similar projects at Oscorp.

He eventually created a serum derived from reptilian DNA and injected himself with it. Initially, it seemed the serum was a success, as his arm grew up almost instantaneously. But the success was short-lived, as Curt began growing scales, fangs, and a tail. Eventually, the reptilian DNA overtook his mind, and he transformed into a fully-fledged lizard monster.

At first, the Lizard was a creature acting on pure instinct and rage, terrorizing innocent civilians. He was opposed by Spider-Man, who both the Lizard and Dr. Connors were fascinated by. After making his escape, the Lizard was able to gather his bearings and access the human side of his mind, merging his two personalities into one identity.

From there, Connors embraced his new identity as the Lizard, and looked at it as the key to evolving humanity into a new age. He held firm to his belief that cross species genetics was the answer, despite his family and Spider-Man calling him crazy. Never giving up on his ideals, the Lizard was still susceptible to being overtaken by his animalistic rage. One such incident resulted in him devouring both his wife and son, something he sorrowfully regretted after coming to his senses.

Since then, Spider-Man has spared all compassion he once had for the Lizard, and is dedicated to bringing him down. While the Lizard still believes humanity must evolve, he doesn't want to be seen as a madman, and has opted to stay out of the spotlight until he can come up with a viable solution to his problems that Spider-Man might be able to get on board with.

Retrieved from "https://marvelcomicsfanon.fandom.com/wiki/Curtis_Connors_(Earth-101)?oldid=259333"
Community content is available under CC-BY-SA unless otherwise noted.