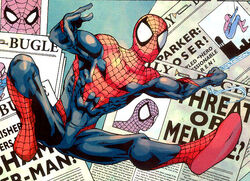 Spider-Man's history is exactly the same as that of his Earth-616 counterpart until the Marvel NEW! relaunch.

Curt soon realized that the Lizard was becoming a problem he could not solve. He used all of the technology at his disposal to create a mind-switch device. He switched bodies with Peter Parker, which seemingly banished him to the Lizard's body (it did not go as planned). He made many changes to Peter's life, resuming his job at the Daily Bugle, modifying his powers, and returning to other old habits.

Spider Physiology: Spider-Man retains the same powers as 616, with a few advanced mutations courtesy of Connors.

Curt has advanced genius in the field of reptile study, as well as memories of studies from Peter Parker. His experience in savage combat makes him a master of his new talents.

Retrieved from "https://marvelcomicsfanon.fandom.com/wiki/Curt_Connors_(Marvel_NEW!)?oldid=255402"
Community content is available under CC-BY-SA unless otherwise noted.