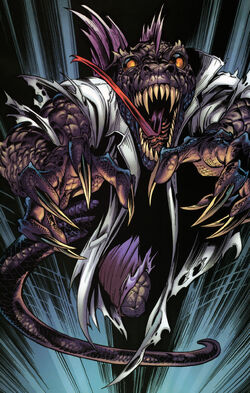 Single
Origin
Origin
After Curt body-switched with Peter Parker to escape the Lizard, he continued fighting Spider-Man, and may have gained Kaine's mind.
Creators

Lizard's history is exactly the same as that of his Earth-616 counterpart until the Marvel NEW! relaunch.

Curt soon realized that the Lizard was becoming a problem he could not solve. He used all of the technology at his disposal to create a mind-switch device. He switched bodies with Peter Parker, which seemingly banished him to the Lizard's body (it did not go as planned). Lizard fled to the New York sewers, now mindless, and continued to fight Spider-Man. He developed more advanced lizard-like powers, and has shown signs confirming that Kaine may possess his body.

Lizard Physiology: Lizard retains the same powers as 616, with a few advanced mutations:

Retrieved from "https://marvelcomicsfanon.fandom.com/wiki/Curt_Connors_(Lizard)_(Marvel_NEW!)?oldid=255330"
Community content is available under CC-BY-SA unless otherwise noted.