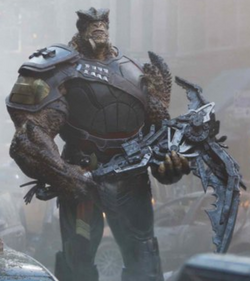 Raised alongside a cadre of trolls that abandoned their home in Vanaheim, Cull Obsidian became a fighter at a young age. Over time, his tribe would be almost completely wiped out by the forces of the galaxy, leaving Obsidian all alone.

He went on to become a bounty hunter, and was eventually hired to join Corvus Glaive and Ebony Maw as a member of their crew. The three of them would eventually end up forming an alliance with the Mad Titan Thanos, thus reforming the Black Order.

Cull fell in love with Thanos's daughter, Proxima, but was too shy to do anything about it, and was heartbroken when she married Corvus. Burying his feelings, he simply let his sense of hurt drive him in being the fiercest warrior he could possibly be.

He was eventually present during the Raid on Wakanda when the Black Order was attempting to liberate the Power Stone. However, their mission failed and Cull Obsidian was kept as a prisoner in a Vibranium Cell, which he proved unable to escape from. Eventually, he got a chance to escape during the confrontation between Kraven and the Guardians of the Galaxy. During the scuffle, Obsidian attempted to bond himself with the Venom Symbiote, but was interrupted by Groot.

Obsidian was then imprisoned once more. However this time, he would eventually be freed by the Cosmic Ghost Rider, and he rendezvoused with the surviving Black Order members on Sanctuary II.

Wishing revenge on the Avengers and the Wakandans, Obsidian volunteered to lead another raid on the nation when they received word that the Mind Stone was now being harbored there in the form of the Vision. During the ensuing battle, Obsidian ended up locked in combat with Valkyrie, who was able to break through his skin with her sword, Dragonfang, causing extensive damage to him. As he began to bleed out, he was put out of his misery when Giant-Man incidentally stomped on him.