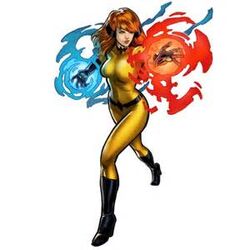 Earth-6109.2
Base Of Operations
Attilan, Blue Area of the Moon
Characteristics
Gender

Little is known about Crystal's life before the House of Agon's association with the Ultimate Alliance. It can be assumed to be similar to her mainstream counterpart.

Crystal tells the Ultimate Alliance that Medusa went down to Earth to search for the Ultimate Nullifier. After Medusa is discovered to be brainwashed into one of Doctor Doom's servants, Gorgon mentions that Crystal will accompany him and Triton to fight Doom and make him change Medusa back while the heroes head to the Skrullos. She is presumably beaten and transformed by Doctor Doom along with Gorgon and Triton as she is not heard from for the rest of the game.

Has some training in hand to hand combat.

Crystal can sustain a certain elemental phenomenon for approximately one hour before her mind begins to tire. She can also create any number of effects in succession for about forty-five minutes before mental fatigue impairs her performance.

Retrieved from "https://marvelcomicsfanon.fandom.com/wiki/Crystalia_Amaquelin_(Earth-6109.2)?oldid=131611"
Community content is available under CC-BY-SA unless otherwise noted.