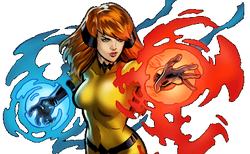 Crystal was the second child born to the Inhuman nutritionists Quelin and Ambur. Her father Quelin was the brother of Rynda, wife of Agon, king of the Inhumans, and as such she was considered part of the Royal Family of Attilan. Like her older sister Medusa, Crystal was subjected to the Terrigen Mist when she was an infant, and the process endowed her with certain mental powers.

While she was still a child, war erupted, forcing Crystal and her kinsmen to flee Attilan. Crystal passed through adolescence into young adulthood while wandering with her kinsmen through Asia, Europe, and finally America in search of Crystal's amnesiac sister Medusa. When they finally caught up with Medusa in New York, Medusa had sought refuge with the Fantastic Four, mistaking her kinsmen for her enemies. Crystal then met Johnny Storm of the Fantastic Four and the two began a romantic relationship but it didn't survive Crystal's return to Attilan.

Elementalist: Crystal possesses the ability to mentally manipulate the four basic elements of nature: fire, water, earth, and air. She does so by means of a psionic interaction with the substances on a molecular level.

Has some training in hand to hand combat

Crystal possesses the normal strength of a female Inhuman who engages in moderate regular exercise. Due to generations of eugenics, Inhumans are superior to humans in strength, reaction time, stamina, resistance to injury and speed.

Crystal can sustain a certain elemental phenomenon for approximately one hour before her mind begins to tire. She can also create any number of effects in succession for about forty-five minutes before mental fatigue impairs her performance.