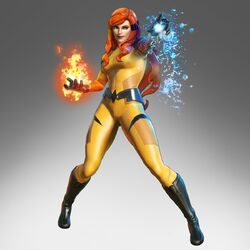 I used to believe that humans were all monsters, that they were something to be afraid of. You, Johnny Storm, have shown me I was wrong. That humanity is beautiful, strong-willed, kind, and intelligent. For this, I will always be grateful to you.

Growing up, Crystalia's parents were always more focused on her older sister, Medusalith. However, this did not cause Crystal to resent her, in fact it was quite the opposite as the two of them became very close. As years passed, Medusa went on to marry Black Bolt and become the Queen, which promoted Crystal to the status of Princess of Attilan.

Later when Medusa mysteriously vanished from Attilan, Crystal was put in charge of a search committee consisting of herself, Triton, and the Reader. Their search led them to the Earth, where they discovered Medusa had been brainwashed into becoming a member of the Frightful Four, a group of supervillains who opposed the Fantastic Four.

Crystal and the Inhumans then found themselves intervening in a battle between the two teams. She and the Fantastic Four member, Human Torch, felt an instant attraction to each other, despite initially believing each other to be enemies. The Inhumans set out to capture the Fantastic Four to bring them back to Attilan for questioning, but after a conversation led to a mutual understanding, they all ventured back together.

From there, the Inhuman Royal Family and the Fantastic Four formed an alliance, which led to the people of Attilan desiring to become more involved in Earth politics. Crystal volunteered to act as Attilan's liaison on Earth, partially because she wanted to spend more time with the Human Torch. The two would go on to date on and off, but Crystal always found herself putting her responsibilities as Princess of Attilan first.

Retrieved from "https://marvelcomicsfanon.fandom.com/wiki/Crystalia_Amaquelin_(Earth-101)?oldid=249292"
Community content is available under CC-BY-SA unless otherwise noted.