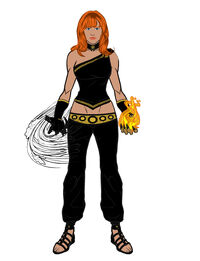 Crystal Amaquelin was born as the second daughter to the Attilanian Royal couple of Lord Quelin Amaquelin and Duchess Ambur Amaquelin. From birth, Crystal was intended for Prince Maximus Boltagon in a pressured, socially, and politically arranged marriage. Quelin and Ambur were lucky in the sense that although their marriage was arranged, their love grew into one that was very strong and true and they hoped the same would happen for their daughters. However, these hopes were shattered, at least in Crystal's case. After witnessing some disturbing behavior that Maximus performed as a child, Quelin and Ambur wished Crystal could be released from her intended vows and be allowed to marry for love, but this would have been completely and utterly socially taboo in Attilanian culture for a girl in Crystal's position and King Cronus would never have allowed it. As Crystal grew in age, she was considered one of the most beautiful girls in Attilan. When Crystal reached the age of 15, she underwent her Terrigenesis ceremony. To everyone's surprise, Crystal initially did not display any immediate, permanent physical mutations. This made her even more physically desirable. Crystal remained in the Terrigenetic training compound to learn more about her powers, adapt to them, and gain great control over them, as was customary. Fearing that Crystal's great physical beauty would tempt other men, men she was not intended to marry, King Cronus forbade Crystal from leaving the Royal Palace and its grounds. When others came to visit Crystal, such as her friends, supervision was required.

Eventually Crystal grew weary of her isolationist life and dreaded her fast approaching, impending marriage to her cousin, Prince Maximus. As a result, she used her powers to escape Attilan's mountain refuge and fled into Greece. She worked her way to Athens. Due to her genetically engineered, higher intelligence she was able to pick-up both Modern Greek and English over the course of a couple months. During this time, the Royal Family turned Attilan upside down in search of Crystal. Eventually they discovered evidence that Crystal had fled the city. They then sent the rest of King Cronus' handpicked Royal Guard to retrieve her. In Athens, in contrast to Crystal's forced sheltered years, she engaged in a life of partying, drinking, and experimenting with some party drugs. Eventually, Crystal came across Johnny Storm. Johnny, Sue, and Ben tagged along with Rui on a scientific research trip to Athens. Johnny, not interested in the research aspects of the trip, slipped away to explore Athens' nightlife and found himself in a nightclub. Crystal, who was at the club with a group of frat boys studying abroad in Athens that she had recently met, was the star of the dance floor. Johnny was immediately enchanted by her. During one song, two of the frat boys began to get too "handsy" with Crystal and continually harassed her in this way, despite Crystal making it known that she felt uncomfortable and wanted them to slow down, stop, and leave her alone. Johnny, seeing what was going on, stepped in and intervened. The three got into a small fight, but Johnny finally ended it as he grabbed their fists, while they were attempting to punch him, and subtlety burned them quickly as they made skin contact. The two frat boys fled in pain, though they didn't receive any permanent burn injuries. After this scuffle, Crystal thanked Johnny for his help and the two shared a dance. The two found immediate chemistry between one another. However, there time together was cut short when the Attilanian Royal Guard tracked down Crystal in order to recover her and bring her back to Attilan. Not wishing to return, Crystal pleaded Johnny and the rest of the Fantastic Four to help her not be taken. This resulted in a skirmish between the Attilanian Royal Guard and the Fantastic Four. Despite their best efforts, the Royal Guard succeeded in capturing Crystal.

Once returned to Attilan, Crystal was harshly given a verbal reprimand by King Cronus, within which he told her that if it was not for the fact she was intended to be married to Prince Maximus, she would have been put to death. Shortly afterwards, the Fantastic Four tracked Crystal and the Royal Guard back to the lost city of Attilan.

Retrieved from "https://marvelcomicsfanon.fandom.com/wiki/Crystal_Amaquelin_(Earth-515)?oldid=255129"
Community content is available under CC-BY-SA unless otherwise noted.