Start a Wiki
"Crusher" is the twenty-sixth episode of Assemble!'s Season Five and the one hundred and twenty-ninth episode overall.

Carl Creel was on a self-piloted military jet, heading to a HYDRA Base in the Southeast Asian island of Madripoor.

-How is the trip going, Creel?- Major Glenn Talbot of the ATCU talked to the former boxer through his intercommunicator.

-Everything’s alright, Major.- He nodded, looking sternly at the wall before him. -You say there is an enhanced being in that base?-

-It is a hellhole, honestly.- Talbot affirmed through the intercommunicator. -No member of my troops made it out alive.-

-Oh, Coulson doesn’t have a clue about this.- The United States Army Major chuckled.

From the Playground, Coulson smiled. -Oh, if he only knew.- He looked at Mack and Fitz, who had tapped into the Major’s intercommunicator. -I guess we have to call in the Power Rangers.-

-They’re on their way.- Leo looked up at the other two S.H.I.E.L.D. agents. Mack’s face lit up noticeably.

Creel’s jet landed in Buccaneer Bay and the former boxer pulled his ball and chain out of the vessel. Suddenly, he was ambushed by Hand Ninjas, who tried to eliminate him. Placing his hand on the Air Force jet, “Crusher” Creel absorbed the metal’s properties, swinging his ball and chain at the ninjas that were coming to him. One of the ninjas was about to hit him with his weapon, but Absorbing Man grabbed the blade firmly and disintegrated the metal.

-彼が強化されています!- One of the ninjas yelled, taking a couple steps backwards.

Grabbing the ninja that tried to attack him by his leg, Absorbing Man tossed him against some of the ninjas, killing them instantly. A Hand member threw a smoke grenade at the enhanced being, making it impossible for him to see. The ninjas tried to slice through his skin, but the jet’s metal was harder than the blades’. Creel started swinging his ball and chain around, but the Hand members did their best to dodge it. Desperately, the ninjas started throwing smoke grenades at the former boxer who, due to being in contact with so much smoke, took on the properties of it, becoming intangible and being able to levitate. Creel gathered all the smoke and propelled it towards the Hand ninjas, throwing them off the pier. Absorbing Man went back to human form, picked up his ball and chain and got headed to the HYDRA Base.

-You could say so…- Absorbing Man shrugged, walking through Lowtown. -You were right, this place is a hellhole.- “Crusher” muttered, taking a look at the drug dealers in every corner.

-Focus on the mission, Creel.- The Major ordered.

As Absorbing Man followed the path to the base, he found himself in the Bamboo Forest. -Are you serious? A forest?- Carl muttered, as he found the entrance to the HYDRA base… Which was the entrance to a cave. -A cave… My favorite place to fight.- He smirked, sliding down to the bottom of the cove.

As soon as Creel stepped into the cave, his intercommunicator went dead.

-Oh, that must be the EMP field. I am so sorry.- Gorgon smirked, looking down. -You did pretty well against my ninjas.-

-I thought this was a HYDRA base.- “Crusher” commented.

-It is, indeed. But I am part of both HYDRA and the Hand.- The man in red shrugged, walking over to the machines that were working in the background. -I will have to differ, though. This place is not a hellhole. This place is Hell on Earth… And it is so appealing to me.-

-H-How do you know that I said that?-

-Ever heard of telepathy? Of course you haven’t. You’re just Talbot’s puppet.-

-I am no puppet.- Absorbing Man muttered bitterly.

-Prove it.- Gorgon smirked, still not looking at Absorbing Man.

-You chose the wrong place to start a fight.- Creel put his hand on the rocky wall, absorbing its properties. Putting his sunglasses on, Gorgon looked up at “Crusher” for the first time. -Take those off.- Absorbing Man nodded at the sunglasses.

-Worst mistake of your life… But as you wish.- Shishido smirked, taking the sunglasses off and petrifying the “Crusher”. -Petra et lapis.-

-Well… That was unexpected.- Tomi put his sunglasses back on.

-I have survived being petrified by an alien artifact that has killed people before… Did you really think you could stop me?-

-Carl “Crusher” Creel, meet Godkiller.- Gorgon unhinged his sword, pointing it at the former boxer. -Wielded by Zeus himself, it has killed kings, emperors and even made a god bleed in a mortal's hands. Do you really think I can’t stop you?-

Absorbing Man tried to grab the sword’s blade and absorb its properties, but it turned his rocky hand back to human.

Suddenly, a shockwave blast hit the evil mutant, pushing him against a cave wall.

-What?!- Creel turned around, completely turning back to human form.

-You’re welcome.- Quake smirked, holding her hands in front of herself. Lincoln Campbell, Joey Gutierrez and Slingshot appeared behind her.

-Talbot told me you weren’t informed about this.- Absorbing Man muttered.

-Oh, we weren’t.- Lincoln shrugged. -You’re welcome tho. Joey, can you shut those machines down? The EMP is bugging me.-

Joey took a couple steps forward and focused on the machines behind Gorgon, making them melt.

-NO! What are you doing?- Tomi yelled.

-Haciendo lo que debemos hacer, villano. [Doing what we must do, villain]- Elena tilted her head slightly, before running towards Gorgon and punching him repeatedly in a single heartbeat.

Charging his own hands, Lincoln took a step forward towards HYDRA’s member and fired an electric blast at him.

-I can’t melt the sword!- Joey yelled, holding his hand out at the Godkiller Sword.

-Of course you can’t! It made a god bleed in the hands of a mortal… No petty Inhuman can damage it!- Gorgon chuckled, reaching out to his sunglasses.

-Watch out! His eyes can petrify you!-

-Joey, pull a Lucio, now!- Daisy ordered. Shishido’s sunglasses melted in his hand. Quake crouched and placed her hand on the ground, creating an earthquake under Gorgon.

-Uhm… Guys… The cave is crumbling down…- Lincoln looked up at the rocks that fell from the cave’s ceiling.

-Yo-Yo, get Joey and Creel out with your superspeed!- Johnson pointed at the cave’s entrance, and Slingshot got them out safely. After coming back to the starting point, she started climbing to the entrance without powers. Noticing this, Quake created a shockwave underneath her, getting her out of the cove. Daisy and Lincoln then looked at each other and put their arms to their sides, their palms pointing towards the ground. Using their powers, both of them propelled themselves up to safety. Getting on a Quinjet, the five of them left Madripoor after having accomplished their task.

After surviving the earthquake thanks to his superhuman durability, Gorgon slashed through the rocks blocking his path, making it out of the cove.

-This will not go unnoticed, Inhumans.- Shishido muttered, swearing revenge.

"You were right, this place is a hellhole." 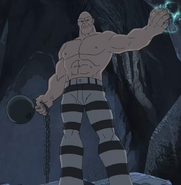 "You chose the wrong place to start a fight."

"Well… That was unexpected."

Retrieved from "https://marvelcomicsfanon.fandom.com/wiki/Crusher_(A!)?oldid=148093"
Community content is available under CC-BY-SA unless otherwise noted.