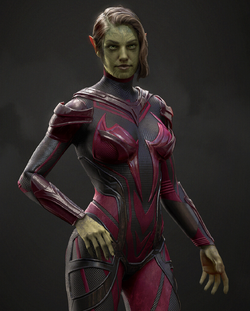 Oh, please. You people are so easily fooled I wouldn't even have to shape-shift to get what I want.

When the Skrulls decided to begin amassing information the human race, Criti Noll was selected to infiltrate the Avengers in the form of the Black Widow. She spent two weeks with the team and felt like the only potential threat she might encounter was the Black Panther. However, during her time on Earth she came to believe that the Avengers and most humans were genuinely good people.

She was able to return to her home undetected, and passed on her information to Emperor Dorrek. For the next few years she acted as part of his personal guard, and started to realize how ruthless he truly was. She eventually became disillusioned with the Kree-Skrull War, believing that both sides were in the wrong, and only perpetuating the war out of arrogance.

She became a mercenary, working under cover for anyone who needed her services. She was eventually hired by a shady organization called the Universal Church of Truth to infiltrate the Guardians of the Galaxy and bring them in for capture.

However, after getting a feel for the Guardians, they came to remind her of the Avengers. She outed herself to them and surrendered herself into their custody to prove that she wasn't their enemy. She eventually gained the trust of Gamora, who allowed Criti to assist them in taking down the Church.

Ever since then, Criti has decided to work with the Guardians and act as their informant from all over the galaxy. When she discovered one of her fellow Skrulls, Titannus, was plotting to lure Galactus to Skrullos, the Guardians attempted to intervene. However, they arrived on Skrullos too early, and were captured by Dorrek's forces. Galactus showed up soon after and began tearing the planet apart. Luckily, that was when the Avengers arrived to help save the day, and the Guardians were freed in the shuffle. Unfortunately, they were not able to save Skrullos, but they did succeed in evacuating a good portion of the Skrull species and relocating them to Earth. Criti decided to go with her people to help them adjust to their new lives, but promised that if the Guardians ever needed her, she'd be there.

Retrieved from "https://marvelcomicsfanon.fandom.com/wiki/Criti_Noll_(Earth-101)?oldid=262768"
Community content is available under CC-BY-SA unless otherwise noted.