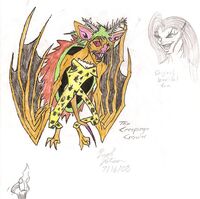 Brownish-black
Unusual Features
The Creeping-Crawler possesses, in her normal, unaltered form, two big, bulging yellow eyes, a bat-like snout, two enormous incisors with 2 rows of razor-sharp teeth behind them, two enormous ears, a pair of hairy antennae, raggedy green hair on head, an extremely lithe and thin body and limbs, a pair of enormous, bat-like wings for hands, a gigantic, spiky turtle shell on back, a razor-sharp tail between legs, and three-toed, razor-sharp feet.
Status
Citizenship

After the Animal Assassin's first defeat by the Zoologist and Specia, he realized that he longed for companionship, someone to be with and partner with. Remembering of the Veterinarian's cloning techniques and machines, the Animal Assassin mentally commanded a raven to retrieve a strand of Specia's DNA from the remains of the battlefield where they had recently fought, while he traveled to one of the Vet's former labs where the Botanist had once created the Animal Assassin himself to prepare and pre-program the machines for cloning a new, evil Specia. The raven finally arrived with the DNA sample just as the Animal Assassin was putting the finishing touches on the machine's programming.

Placing the strand in the genetic reconstructor, the Animal Assassin watched on as the body of his new companion slowly began to form. Awed by her beauty as she awoke, the Animal Assassin dubbed her Princess Predator. Going into business together as assassins-for-hire, the duo successfully killed several important businessmen, all of them corrupt, before running into the Zoologist and Specia. The duo viciously attacked and overwhelmed the two, before overexertion of Princess Predator's powers soon took a toll on her body's genetic structure, and she began degenerating, shocking all present. She eventually became a hideous, malevolent shadow of her former self, a personification of all the evil, ugliness, and cruelty of the animal kingdom, a broken mirror image of Specia herself. Horrified at what happened to her, she viciously attacked Specia and the Zoologist, only to be knocked out by her former lover, the Animal Assassin, who, disgusted at her appearance, callously left her to the two and escaped.

Retrieved from "https://marvelcomicsfanon.fandom.com/wiki/Creeping-Crawler_(Earth-11190)?oldid=162703"
Community content is available under CC-BY-SA unless otherwise noted.