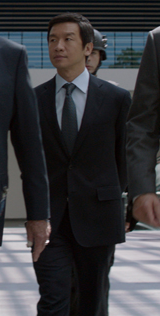 Councilman Yen was a member of the World Security Council who oversee the daily operations of S.H.I.E.L.D.. Following the Battle of New York, Yen and the rest of the council coordinated with Alexander Pierce to develop a stronger role for S.H.I.E.L.D..

Yen, along with the rest of the council was called to the Triskelion by Pierce to witness the launch of Project Insight. When Pierce's was exposed by Captain America as a part of HYDRA's infiltration within S.H.I.E.L.D., STRIKE, which was composed of HYDRA members, held the Council hostage, until Black Widow who had been disguised as Councilwoman Hawley took the HYDRA operatives out.

Retrieved from "https://marvelcomicsfanon.fandom.com/wiki/Councilman_Yen_(Earth-1010)?oldid=123920"
Community content is available under CC-BY-SA unless otherwise noted.