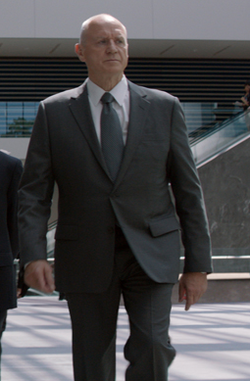 Bald,White on the sides and back
Status
Citizenship

How the hell did a French pirate manage to hijack a covert S.H.I.E.L.D. vessel in broad daylight?"
"For the record, councilman, he’s Algerian. I can draw a map if it’ll help

Some time after the Battle of New York, Rockwell gained a seat on the World Security Council. Following the Battle, Rockwell and the rest of the council coordinated with Alexander Pierce and Nick Fury to develop a stronger role for S.H.I.E.L.D.. To that end, they created Project Insight.

You smug son of a bitch.

Rockwell along with the rest of the council was called to the Triskelion by Pierce to witness the launch of Project Insight. When Pierce's was exposed by Captain America as a part of HYDRA's infiltration within S.H.I.E.L.D., STRIKE, which was composed of HYDRA members, held the Council hostage, until Black Widow who had been disguised as Councilwoman Hawley took the HYDRA operatives out.

He stood by as Nick Fury arrived and as Black Widow released all S.H.I.E.L.D. files to the public. Unnoticed by the others, Pierce moved to his phone pressed a button and the security badges on the council members' chests exploded, killing them.

Retrieved from "https://marvelcomicsfanon.fandom.com/wiki/Councilman_Rockwell_(Earth-1010)?oldid=123918"
Community content is available under CC-BY-SA unless otherwise noted.