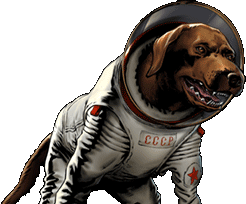 That does it. That enough. No more Mr. Nice Dog. Now Cosmo will hurt everyone.

Cosmo was a former test animal of the Soviet Space Program. He was launched into Earth's orbit as part of an experiment but he drifted off into space at some point during the 1960's, arriving in Knowhere and at some point being mutated, he eventually came to be part of The Collector's exhibition.

He witnessed Star-Lord, Gamora, Groot and Rocket give the Orb to The Collector. After Carina exploded and destroyed the room with the Gem, Cosmo escaped unharmed, trotting out of the collector's building while the Collector was still unconscious after the blast. At some point he returned to The Collector and woke him up by licking him on the face, to which Howard the Duck commented that it was gross.

Cosmo met a distraught Nova shortly after that. He tells Nova that he's on Knowhere, a city right inside the severed head of a giant Celestial. After being Nova's companion, the Nova Prime made the dog the Chief of security on Knowhere. Since then, Cosmo has helped both the Nova Corps and the Guardians of the Galaxy.

Retrieved from "https://marvelcomicsfanon.fandom.com/wiki/Cosmo_(Earth-1010)?oldid=263063"
Community content is available under CC-BY-SA unless otherwise noted.