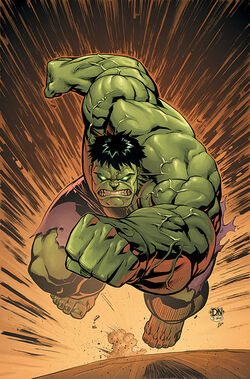 Suit yourself, ugly. I smash harder than the real deal!

The Cosmic Hulk wasn't created to be an anti-Hulk weapon. In fact, he was the result of Galactus' early effort in finding Heralds. He was made by a young Mad Thinker who was affected by the Devourer's telepathic message ordering him to do so. Though abandoned, the robot saw some action before the Red Hulk destroyed him. After a deal with an unknown party, Ezekiel Stane obtained the robot and had him used in his personal war alongside other machines. Fortunately, a break in their systems freed him and the Cosmic Hulk has since become a staunch powerhouse of the Iron Avengers.

Oh, I bet you haven't seen the Hulk do this!

--Cosmic Hulk moments before flying and shooting out lasers

The Cosmic Hulk wasn't built to match the Hulk at all but it isn't any less stronger than its time's Hulk. Instead of gamma radiation, the robot is powered by an infinite resource of Power Cosmic. Infinite, as in it will neither fade nor be depleted as time passes on. With the Power Cosmic, he has some powers the Hulk doesn't have.

Right off the bat, the Cosmic Hulk is able to fly. Although it does look ridiculous, he has no qualms using it and can reach speeds up to Mach 3. In addition to that, he can shoot out energy beams out of his eyes. They're not exactly lasers, but they reach temperatures higher than them and have a powerful concussive effect.

To top it off, the Cosmic Hulk can absorb energies. He stores absorbed energies inside a special energy reserve within his body. He can absorb quite a lot of energy types from cosmic to magic energies. As long as he doesn't spend it on anything relevant, the energy stays inside him and gets slowly depleted as he uses them to enhance his own body.

The Cosmic Hulk is a powerful self-taught brawler who can keep up with fellow superhumans. He isn't as smart as his original's human counterpart, but he is far from idiocy. The Cosmic Hulk's processor was built by a space-maddened Mad Thinker, allowing him to decipher and speak alien languages with near-native fluency. His overall intelligence resembles those of a normal human.

Class 100+. His ability to absorb energy can strengthen him to even greater levels in addition to his base form's phenomenal might.

The Cosmic Hulk has no fear of power shortages or EMP attacks since he is fully empowered by the limitless Power Cosmic. Such power can be drained by external sources, unfortunately. This was the reason Red Hulk managed to destroy him once he figured out how he works. The robot's metallic body isn't immune to magnetism as well. His strength matches those of the Hulk's, but his emotion simulation doesn't allow him to go stronger as he goes angrier.

The Cosmic Hulk's energy absorption, while powerful, is only temporary in effect. If he fights for too long or expends too much of his newly-absorbed energy reserves, then he will return to resorting to his Power Cosmic energy. Absorbing the wrong type of energy may have disastrous results, too. He lacks the ability to see spirits and his self-repair system is obsolete compared to the original's healing factor. His energy tracking ability, while versatile, is not as attuned as the Hulk's own.

Equipment: He simply wears shorts.
Transportation: His flight and leaping abilities, Carrier-Zero.
Weapons: He is a weapon by himself.

Retrieved from "https://marvelcomicsfanon.fandom.com/wiki/Cosmic_Hulk_(Earth-5000)?oldid=251729"
Community content is available under CC-BY-SA unless otherwise noted.