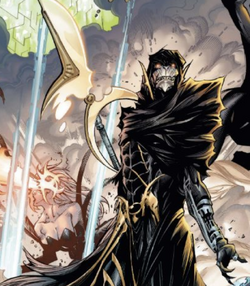 I will impale you on my blade and let it bathe in the blood of your allies.

Corvus Glaive was a space pirate and assassin who took pride in his ability to best any opponent. He ended up forming an alliance with fellow marauders Ebony Maw and Cull Obsidian.

Over time, the three of them were eventually recruited by the Mad Titan Thanos to join the Black Order. Glaive quickly rose up to become a high ranking commander in Thanos's army. He even went on to marry one of Thanos's adopted daughters, Proxima Midnight.

The Black Order continued to work alongside Thanos to collect all six Infinity Stones from across the galaxy. This later brought Corvus in particular into conflict with the Guardians of the Galaxy, who he had previously attempted to hire them to apprehend Gamora, who had gone rogue.

He eventually went into battle with them over the Reality Stone. Corvus came close to obtaining the Stone for himself, but ended up being impaled by his own glaive, which had been grabbed by his own sister-in-law, Gamora.

Retrieved from "https://marvelcomicsfanon.fandom.com/wiki/Corvus_Glaive_(Earth-101)?oldid=250182"
Community content is available under CC-BY-SA unless otherwise noted.