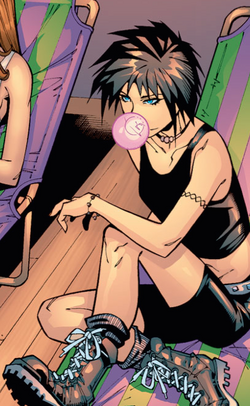 Cordelia Frost is the younger sister of Emma Frost and Adrienne Frost, as well as being the youngest of the four Frost siblings. She was regarded by her parents as being the "lost" one in the family, and as such she rebelled by dressing in black, having sullen, sulky moods and being argumentative, although she was only a teenager.

Familial Power Immunity: Not much is known about Cordelia's powers other than the fact that she is immune to Emma's telepathy, which is a normal quirk of mutant physiology. This immunity is due to her sibling status, which is a common amongst siblings, much like Cyclops and Havok.

Retrieved from "https://marvelcomicsfanon.fandom.com/wiki/Cordelia_Frost_(Earth-1010)?oldid=148514"
Community content is available under CC-BY-SA unless otherwise noted.