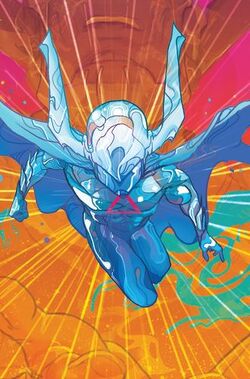 Conner Sims was a US Marine during the Vietnam war; sent on a reconnaissance mission, he and his squad uncovered a secret project by a newly formed group called A.I.M.

When an experiment to try and breach into other dimensions went wrong, it caused an explosive chain reaction which engulfed the laboratory with volatile energy and killed everyone except Conner, who was instead sent to the Neutral Zone.

The Marine Corps labeled Connor as KIA alongside his unit and the A.I.M scientists.

In reality he was in the Neutral Zone, and as a result of this experiment Conner gradually developed incredible superpowers, but was lost in a dimension he had no clue how to escape.

Anti-Man gained his powers after being exposed to certain energies present within the Neutral Zone. Due to this, he has incredible powers far beyond most other super-humans. On Earth, only its strongest inhabitants are on par with Connor.

Retrieved from "https://marvelcomicsfanon.fandom.com/wiki/Connor_Sims_(Earth-42180)?oldid=212718"
Community content is available under CC-BY-SA unless otherwise noted.